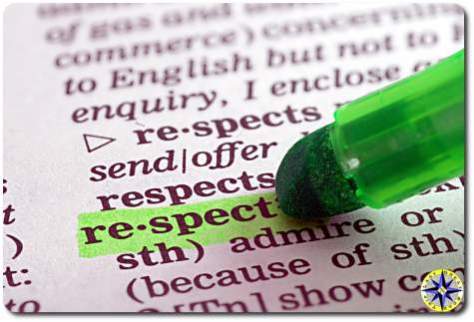 Sometimes we cling to words like a drowning man to a straw…  Some people find comfort in their familiarity, some use them to comfort others and help.  However, some use words to feel superior while others wield words like a knife to cut down anything different.

This point was driven home to me the other day… just a bunch of simple comments posted on the forums.  Comments mocking the website’s use of the term “beadlocker” rather than beadlock wheel and implying the whole “How To Mount Tires on Beadlocker Wheels” story was of no value since the author was not versed in the vernacular they use.

These beadlocker comments are of course nothing and not the point… But it highlights the fact that some people are assaulted by words for being seen as different.  Some people constantly take an onslaught of slanders so others can feel good about themselves at the expense of others.

This post will not change anyone’s life but hopefully it will encourage readers to at least think about standing up for another who is under a verbal assault.  And I mean a real assault with verbal daggers about race, religion, age, gender or sexual preference.

To fully understand the affects of words and how to stand up for others, read one of the best perspectives on the subject, “Speak UP!” put out by Teaching Tolerance.

By the way:  google beadlockers we’re not along… 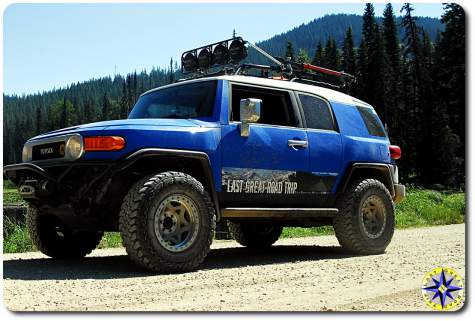 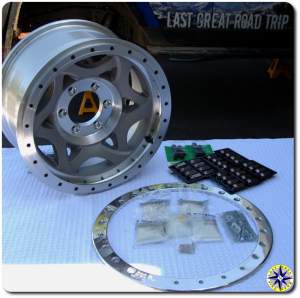 Yup, I’m talking beadlock wheels.  IHRA Pro Stock cars, CORR trophy trucks and vertical wall scaling rock crawlers all use them.  But how exactly do they work and what does it take to install them.

When an IHRA Pro Stock car travels down the quarter-mile in under eight seconds or an off-road truck airs down real low certain physics take over causing a tire to loose its grip on the wheel often resulting in the tire falling right off the rim.  Beadlocks over come this physics problem with a separate ring bolted to the wheel, holding the tire tightly in place.  Air pressure is replaced by bolt torque to hold the wheel on tight… in less than ideal conditions. 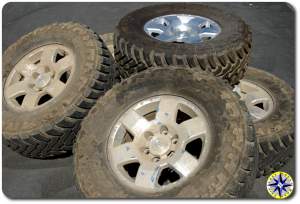 The items required to mount the tires onto our beadlocks and balance them isn’t a long list but requires a couple of inexpensive specialized tool:

This mod is about as hard as changing a tire on the difficult scale but it is time consuming.  Plan for about one hour per tire, bring a stool.

When you select your wheels, check which type of lug nut is required.  Our stock FJC wheels used a flat mag style lug nut and bushing.  The Walker Evens require a cone style lug nut…  of course.  We opted for the titanium colored aluminum 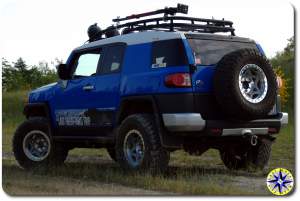 racing lug nuts from Gorilla Automotive.  They are strong, super light and high on cool factor.

With the tires mounted and balances, it was simply a matter getting them onto the rig.  Since you have the torque wrench out be sure to use it…  According to the Toyota manual, lug nut should be torqued to 85 ft/lbs.

With the extra back spacing and our 2″ long travel kit our rig’s front stance is now 82″ wide…  great for stable speed, bomb down desert roads and play in the off camber stuff…  not so much for squeezing through gate keeps.  Every thing is a trade off… 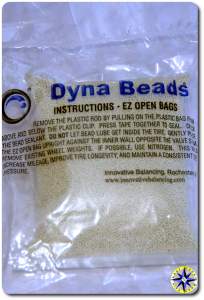 No more shakes and shimmies, better gas mileage and longer tire life what’s not to like…

Spinning tires wobble if they’re not perfectly balanced.  To avoid having your off-road truck shimmy and shake while bombing down the back roads, usually means taping lead weights on the sides of the wheel until a bubble level reads top dead center.  The trouble with lead weights is that they are difficult to  place exactly right, they can fall off on an off-road adventure when wheels and rocks meet.  Additionally as the tire wears the weights are no longer in the right spot. Heavy mud terrain tires require a lot of weight in order to achieve balance.

We recently installed our Toyo Open Country M/T on new beadlock wheels and instead of the usual lead weights we decided on tiny high-density ceramic Dyna Beads from Innovative Balancing…  So how can a few ounces of tiny ceramic beads balance a 75 lbs tire?  Well for those of you who where eating pizza in Mr. Hand’s physics class when he covered centrifugal force, here is how the tiny beads dynamically balance a spinning tire:

These little beads will work on 18 wheelers, RVs, trucks, cars, motorcycles.  If it has wheels, the laws of physics hold true… Ok that’s enough but this will be on the test.

Checking the charts, our 295/70R17 E rated tires required between 6 and 8 ounces of Dyna Beads for each tire. Innovative Balancing sells pre measured bags so we order up a bunch of 8 ounce bags.  The beads themselves come in two sizes, standard and bigger…  we went with the standard size since they offer a couple of installation options but you do need to install their filtered valve stem core.

Since we were mount tires onto new wheels, once the tire was on the wheel we place one 8 ounce EZ Open bag of beads inside the tire cavity and than set the tire and aired up…  yeah that is it.  The EZ Open Bag is designed to open and release the beads the first time the wheel starts to spin.  Your other option is to remove the valve stem core and pore the beads in.  A clear plastic break-bleed hose works well  to guide the beads into the valve stem or you can buy Innovative Balance’s applicator (little bottle w/ clear plastic hose).  Just keep tapping the hose and valve stem  (or tape a pocket rocket to the valve stem) to keep the beads flowing. 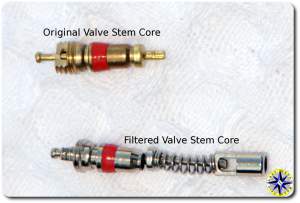 One safety tip from the Dyna Bead guys…  if you use tire bead soap avoid getting any inside the tire or on the Dyna Beads.  We did not use any tire soap so no worries.

So the million dollar question is…  do they work?  We took the rig out on the highway to see if there was any wobble.  We did not notice any wobble or shaking as we drove the back roads tooling along at 35 mph, starting out or stopping.  And at 70 mph the ride was smooth as a Ken Doll.  Not a jitter or shimmy from the steering wheel as we sailed down I5.  Big heavy tires are notoriously difficult to keep in balance sending them into a death spiral – Tire out of balance leads to uneven wear which leads to the tire becoming more out of balance, leading to more wear…  These beads dynamically balance the tire each and every time reducing wear, increasing mileage and ensuring a smooth ride.

So the next time Boy ask “when am I ever going to use physics in the real world”…  I have the answer and a smooth ride.

Update: after tens of thousands of miles and a second set of tires using the Dyna Beads we can tell you that we are very pleased with performance and will continue to use them to balance tires for our off-road adventure truck. 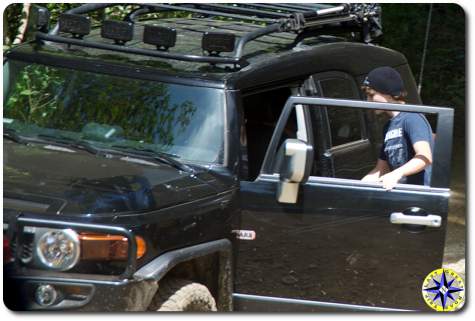 Remember the Lady’s Off-Road Adventure?  I know you do… it was the previous post… While the women grabbed the spotlight, one of the moms got a surprise when she looked back and it was her son in the drivers seat of another 4WD rig coming up the trail.  And Mother like son, he did a great job…  but probably aged a little when the FJ Cruiser looked more like the space shuttle pointed to the moon than a truck driving on a off-road adventure.

And you can see how a good trail boss can walk you out of anything…  Nice job Jacob sticking with it and working through a though off-road obstacle. 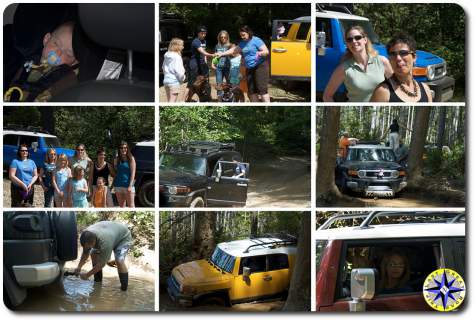 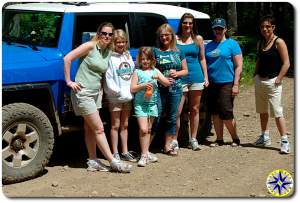 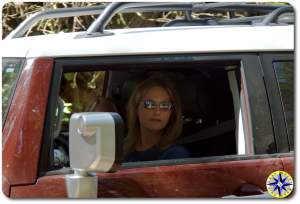 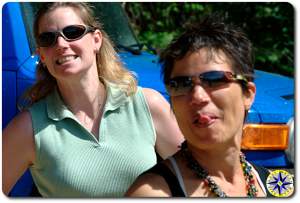 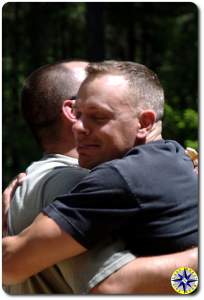 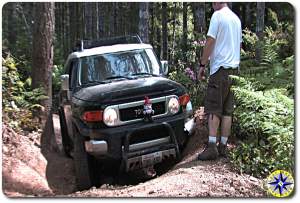