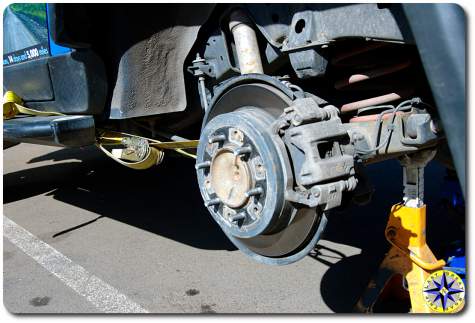 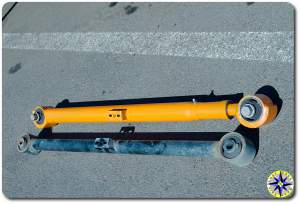 Sooner or later anyone who spends a little time enjoying off-road adventures will hear a story from someone they know who bent their rear lower control arm (LCA).  On FJ Cruisers the stock rear LCAs are not the strongest in the world and the first time they get dragged over a rock or log, they’ll fold like origami.

The fix for this weak link is to swap out the stock rear LCAs for a set Metal Tech 4×4 LCAs made out of D.O.M. tubing, aka high-strength seamless carbon steel.  And as you would expect from the guys who defined protection, Metal Tech has engineer a pair specifically for those who wheel their FJC.  Besides strength, Metal Tech added length adjustments to their rear LCAs to ensure proper geometry is maintained for rigs with different lift setups.  In fact last time we were at Metal Tech, we asked Mark to show us how they build their rear LCA. 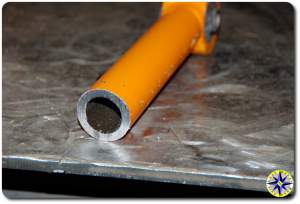 There is always a big confidence booster in a product when the manufacturer is proud to show off exactly how their product was designed and the process for creating a part they put their name behind.  And after seeing how Metal Tech engineered and builds their LCAs, there was no questions about which ones were going on our rig.

Flip the calendar forward a few months and we were back at the shop getting our own pair of rear LCAs. Arriving at Metal Tech, Mark wasted no time putting our rig up on jack stands and pulling the rear wheel.  The procedure is very straight forward, remove the bolt, holding the emergency break line to the LCA and than the bolts that hold the LCA to the rig, one at each end.  One of the tricks Mark showed us that the Toyota rear lower control are installation instructions omits is that by placing a strap around the axle to hold it in place will keep everything still making both LCA removal and re-installation a simple procedure.  When attaching the strap around the axle take care to clear the brake lines and ABS sensor cable. 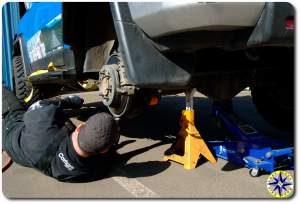 Bolting the new LCA in place is a simple matter of sliding the front head its mount and slide the retaining bolt through to hold it in place followed by doing the same on the other end.  When mounting up Metal Tech LCAs remember the adjustable head attaches in the rear with the grease nipple point up out of the way.  Slide the washers over the bolts front and rear and tighten up the nuts.  You will want to torque the bolts down to the proper setting.  Toyota calls for 96 ft/lbs.  A little hint here:  Fix the nut with a box wrench while turning the bolt head with the torque wrench.

After you have the LCA bolted up and removed your strap, replace the bracket holding the emergency brake line and bolt it into place.  Replace the tire and head over to the other side to rinse and repeat.  That is all there is to it. 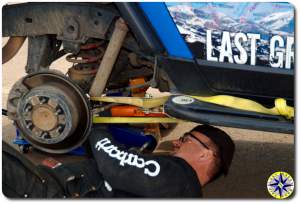 Once both LCAs are replaced and the rig is back on the ground, take it for a spin around the block and than torque down the bolts once more to ensure proper hold.

With the new rear LCAs we can rest a little easier if we have to drag the rear end over an obstacle on the off-road trail without worry that a bent LCA will put an end to our run or worse cause us to hike out for help.

Update: Metal Tech 4×4 has released their second generation lower control arms for the FJ Cruiser and Toyota 4Runner.  The new control arms have the added benefit of being offset that prevents binding and improves it’s ability to slid over obstacles.

2 thoughts on “How To Install Rear Lower Control Arms”