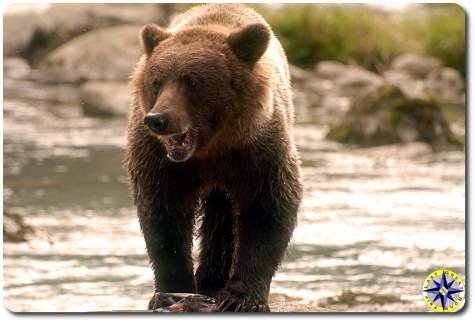 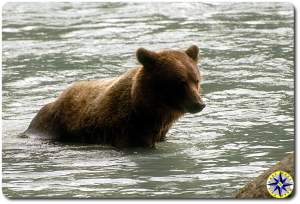 We said good bye to our friends on the Alaska Marine Highway ferry and spent the night in Haines Alaska. In the early morning we decided to go down to the bay and fish the incoming tide for Chum Salmon. We were not the only ones who had that idea. I yelled, “Dad, you may want to avoid the bear.” Dad said “WHAT BEAR!” I don’t have a telephoto lenses… That grizzly was about |——-that———–| far away. As the old joke goes, I don’t have to out run the bear, I just have to out run Dad. 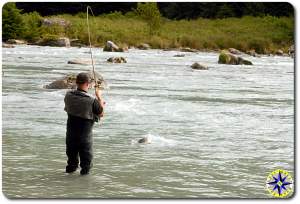 Two different grizzlies poked around and kept us out of the water for a while. It was great watching them fish and move about the rocks in the river. They did decide to wonder off for a bit.

While the grizzlies were gone… the fishing was great. I hooked about a two dozen salmon and landed eight. The winning combination was anything pink on a dead drift. The fish were in the two to four pound range and put up a good fight. Dad did not fish but he did get a chance to try out his bug gear, stay on bear watch and man the camera. Dad also managed to spot a couple more bald eagles doing a little fishing of their own. After about an hour one of the grizzlies wondered back up to our location. The grizzly’s arrival was our cue to get back on the road. 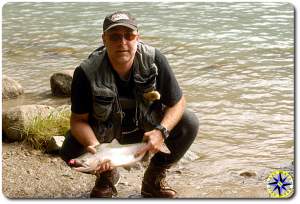 Today we started in Alaska, drover through British Columbia and entered the Yukon Territory. The character of the road has also changed. What started out as smooth well maintained pavement has transitioned to potholes and sections of gravel. The cars are becoming few are far between… so are the gas stations and mini-marts. Beaver Creek is considered a big town in the Yukon, population: 150 and one Internet connection. I’m sitting in the bar putting this entry together at 12:30 a.m. I have to beat last call if I’m going to get this out tonight.

Grizzly bears, fishing, the open road… How could this day get any better? How about we Blow something up! 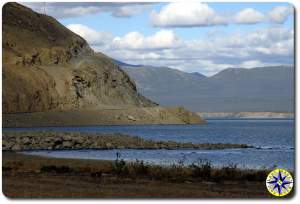 We came upon the road construction in the Yukon Territory around 4:00 p.m. and were told we would have to wait for about an hour. At that point we jumped out… stretched a little and started a conversation with the flag guys… As we started chatting they told us the crew was blowing up the overhanging corner of the old highway… that was all we needed to hear as we grabbed the camera and got set up. They gave us a one minute warning and than WOW. The rock was flying a good second or two before we heard the report from the charge. The clean up took a while but it was worth the wait to see rock fly. 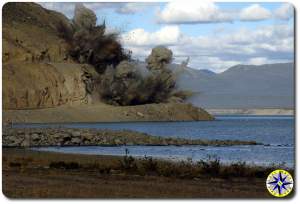 With the bear watching, fishing, road construction and loosing an hour as we shifted from Alaska time back to Yukon time, we were still on the road at 9:00 p.m. but as the pictures show we are clearly making our way north and the sun is still high in the sky late into the night. In fact the sun finally set around 11:30 p.m.

As you recall Toyota’s Open Road Blog was going to mention our adventure. Today Bruce C. Ertmann wrote about our Arctic adventure and added us to the blogroll. Bruce said some really cool things… you need to take a look and leave a comment so he knows you like his kind words. We’ve had the Open Road Blog on our list for a while since Toyota supports our views on diversity and makes a great rig. Keep an eye on the Open Road Blog for video of our trips start. 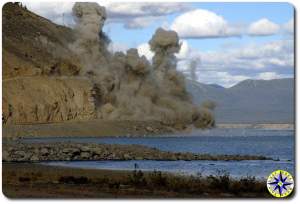 Jim: The Roads in the Yukon are rough and not so Harley friendly. We did run in to a group of about six riders dining at our hotel in Beaver Creak. They seemed very glad to be off the road for the night. We can do the Baja. Make a caravan out of it… a string of rigs moving south to the sun and sand. When we get back we’ll start planning the next last great road trip… Friends conquering the the Baja

Jon: Yes Hula Betty is absent from the pictures. She was really upset by the bear. She should be fine after a good night’s sleep. 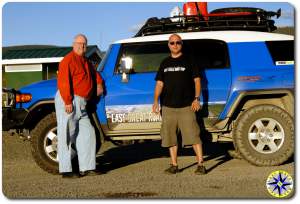 Carla: Thanks for the comments… Knowing you guys are out there following along and enjoying our stories is making this an even better adventure for us. Day 3 somehow fell off the map… it is back and you can see it below.

Juan: Glad to hear from you. This is the real thing and not a cyber road trip from my couch. The pictures don’t lie.