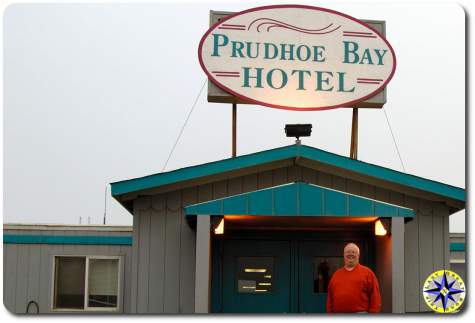 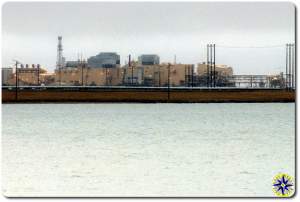 We woke up in Deadhorse at the Prudhoe Bay Hotel. The view is nothing to write home about but the room, meals and location make up for the view. It was 34 degrees this morning and technically still summer. 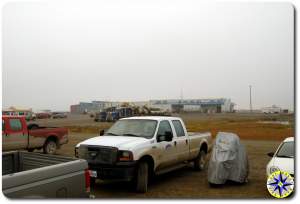 You cannot get to the Arctic Ocean from Deadhorse unless you are in the know and possess $30. We happened to have both. In order to reach the Arctic Ocean you need to go through the North Slope oil fields and the drilling operations run by BP, Exxon, Shell and a few others. Since 911 the area has been off limits to the public. The way around this little road block is to join an organized tour group which takes folks by bus, explaining the oil field operations and showing the sites, including the Arctic Ocean.

The tour is run out of the Caribou Inn, the only other hotel in Deadhorse, and is associated with the Princess Cruise Line. About 50 folks cruised their way up to Anchorage and then bussed up through Denali National Park, to Fairbanks and finally Deadhorse. The great thing about taking this tour was the ability to be one of the youngest one in the room again. Even our Security Escort was retiring this year after 23 years on the oil fields. 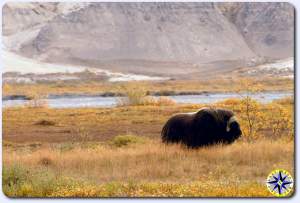 The tour starts with a video (read commercial) on the history and safety record of the pipeline. The oil field is a 365, 24×7 operation with the guys working 12 hour shifts, two weeks on followed by two weeks off. Unless the planes are grounded or can’t land due to fog, Ice, or extreme cold. When we finished watching the commercial (oops I mean historically rich video) and our security escort returned, he had some bad news. There are three polar bears in the region and currently one is loitering by the location where we would normally get out an see the Arctic Ocean. Their security had been maintaining a watch on the bear for a few hours. Because the polar bear was in the area we would not be allowed off the buses. 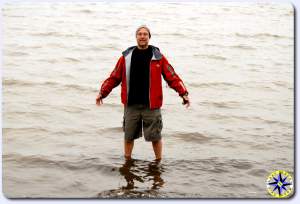 As we piled on to the buses for the tour we were joined by Greg, the owner of the Caribou Inn who runs the local tours of the oil field. Once under way Greg explained how the different fields are self-contained with staff and dorm rooms. He pointed out that they have their own fire department and private security. He showed us where the oil executives stay when they fly up for their annual meeting. Greg also explained how they inspect every inch of pipe in a giant warehouse prior to it being approved for use and how they are able to explore for new oil with a minimal impact to the environment by performing this work only in winter. 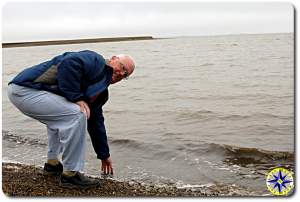 And with that we circled a lot of rusting equipment and found the Arctic Ocean in front of us. Greg and the Security Escorts conferred. There was some chin rubbing, and some chatter on the walkie-talkies. More chin rubbing and after a little more conferring, we were told we could go out to the water in small groups while the additional security who had met us there posted watch. Turns out the polar bear had last been seen by security swimming out to sea only 30 minutes earlier. The bears can swim for miles and are almost impossible to spot since most of their mass in underwater.

When our turn came, we got off the bus and headed for the ocean only 30 yards away. Prepared for this opportunity, I had thrown on shorts and Keens. While others removed their shoes and socks, rolled up there paint legs and tip-toed into the water as it lightly lapped at the shore, I walked in up to my knees and stood in the 38 degree ocean water waiting for Dad to take a picture. This water is cold, and when Dad finally snapped a few pictures, I quickly ran back to shore to see the results. At that point I adjusted the camera, handed it back to Dad and proceeded back into the 38 degree ocean. 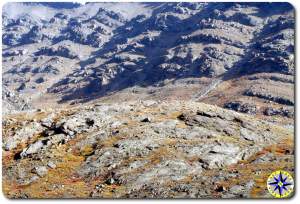 Dad’s turn was next and I readied the camera. Dad explained to me it is not the amount of water you experience but the intensity with which you experience the water. So as Dad stuck his finger into the 38 degree water he said “Rubin & the crew at the Ocean Shores McDonald’s; Joan and Harold I hope you are enjoying the pictures and adventure stories.” And with that Dad completed his swim in the Arctic Ocean and headed back to the bus. 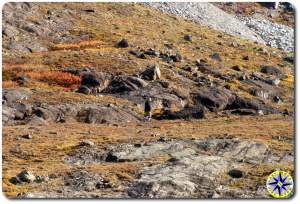 We headed out of Deadhorse in a drizzle. While coming north the weather was sunshine and blue skies, today reflected to true charter of region. Heading south we slipped back into our seats, smiled and started to peer out the windows for large game animals to add to our count. Today was a banner day for Musk Oxen and Dall Sheep. There are 27,000 caribou in the Prudhoe Bay heard. We saw 16. They must count the same caribou more than once.

On the way south as we retraced our previous steps, we descended into the Brooks Mountain Range. One knoll in particular seemed to call out my name. Well being charitable and cautious I approached it. In fact I made a quick walk up to the top of the knoll to take in one final drink of the surrounding beauty. And while the clouds seem to be following us down the mountains, the view remains incredible as I looked for miles in both directions. 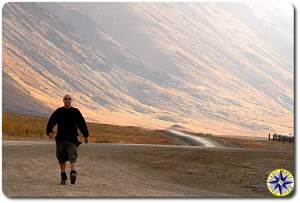 We’ve stayed in Wiseman before. S we know what to expect living off the grid. We did not know to expect this time. When the two B&B’s in Wiseman are full, June rents out her guest cabin. And by cabin I mean it has four walls and a roof. No power, no water, not heat. The outhouse is 20 feet away. You do receive a pitcher of drinking water, a wash towel and basin along with four, one gallon jugs of water to wash up with. With no lights, no plumbing and no Internet this post will definitely be delayed. 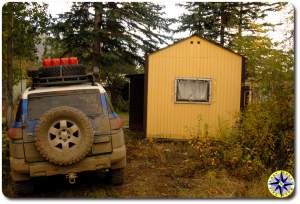 Dave: Glad you’re tracking us and I would recommend a trip with their dad to anyone. The t-shirts are a good ice breaker and thanks to Taylor Made T-shirts for getting them to us.

Mary: just because I don’t doesn’t mean I can’t. Glad the story touched you guys but I don’t know about the cruise maybe a 14 day mother daughter bike tour.

Jim: Thanks for the condolences on Hula Betty. She will be missed. The weather is here, wish you were beautiful and thanks for sticking around and reading our posts. Knowing you guys are there rooting for us is very encouraging.

Joyce: Homicide, have you been watching Law and Order again?