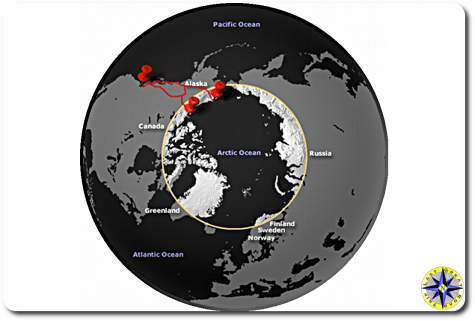 The National Snow and Ice Data Center (NSIDC) describes the Arctic Circle as consisting of ocean surrounded by continental land masses and islands. The central Arctic Ocean is ice-covered year-round, and snow and ice are present on land for most of the year.

The southern limit of the arctic region is commonly placed at the Arctic Circle (latitude 66 degrees, 33 minutes North). The Arctic Circle an imaginary line that marks the latitude above which the sun does not set on the summer solstice and does not rise on the winter solstice. North of this latitude, periods of continuous daylight or night last up to six months at the North Pole.

The Road Trip Triangle is where we will shed our worries and search for new adventures.  It extends from Poulbso WA, to Deadhorse AK, and Inuvik Yukon Canada and we are driving right into the center it.