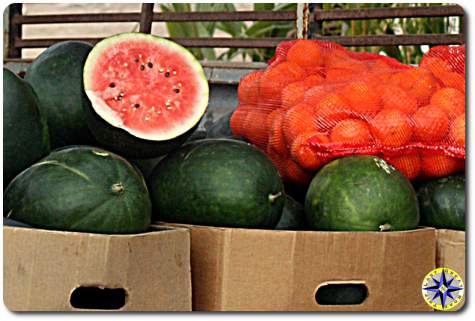 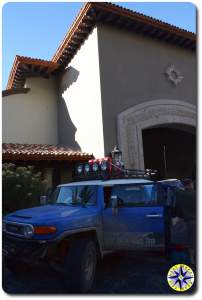 Checking out of the resort, we settled up our bill and exchanged a little more currency to ensure we had enough Pesos to keep filling the tank for the 1,017 mile drive back to the boarder.  As we started loading up the rig, we became somewhat of a spectacle.  I’m guessing they don’t see a lot of guest in the main entrance pulling out a Ready Welder, Maxtrax, half shafts, compressor, fire extinguisher, tools, nuts and bolts… packing it all, along with our clothes, cameras, video equipment and the sovereigns we picked up in town.

First one, than two and before long we were explaining to several guests, who were waiting for taxis, how we had driven the race course down and how the previous week had unfolded for us.  They wanted details about the rig, the roads, what we saw and what the adventure was like.

As their taxi would arrive, they would tell the next passerby to come over and meet us.  While I’m not an attention whore (ok maybe a bit), it was a little surreal to realize these people were genuinely interested in our story.  We were also interested in what brought them to Cabo San Lucas and where they called home.  We’re at the southern most tip of Baja and I swear everyone we met, like us, were from Washington or Oregon.  But it was the couple who’d lived in Drewsey, a dinky little town, in eastern Oregon where Hula Betty’s family hails from that really 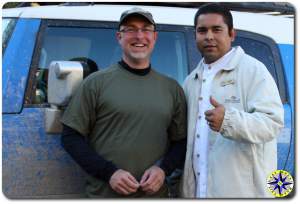 put the size of the world in perspective.  I’m continually amazed to see how we are all connected to each other in one way or an other.

After sharing stories, taking pictures, handing out t-shirts and explaining to some girls that our rig was not their taxi, we headed north out of Cabo.

Mexico #19 connects with Mexico #1 in La Paz.  Along the way the coastal town of Todos Santos sits welcoming those who are willing to wander its quiet streets. 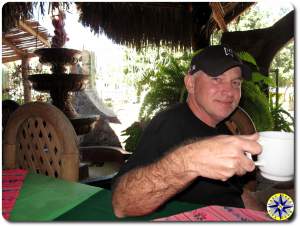 Todos Santos is one of those sleepy little Baja communities with lots of quaint hotels, including the Hotel California, art galleries, authentic restaurants, shopping and beautiful town square. Away from the bustle of Cabo, we decided to settle into one of Todos Santos’ little cafes for breakfast.  Sure we were running two hours late but this place looked inviting and after all, breakfast is the most important meal of the day. 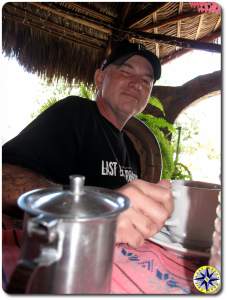 While enjoying our huevos and coffee we tried to plan how far we would travel today.  One of our favorite hotels was the Baja Cactus.  It would be the ideal stop.  But we are 1,200 km from El Rosario and it is approaching 11:00 am.  If we were going to get home in three days, we’d have to go at least 700 km.  Well there, we had a plan, shoot for El Rosario, settle for anything over 700 km from here.  I didn’t say it was a detailed plan but it was as good as any that got us down here.

Leaving town, we made it a point to go by the Hotel California.  No relation to the song, just  good marketing shtick that works on old guys like us who can still remember cruising the boulevards of our youth when the song first came out and hell hadn’t yet frozen over. 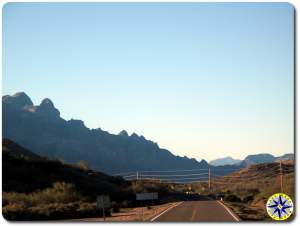 We made it as far as San Ignacio rolling in around 11:00 pm (night driving has become a bad habit now).   Along the way we zigged and zagged in the hills, saw the Sea of Cortez for the last time, visited Loreto after all, followed old farm trucks for hours in the dark and cleared three military checkpoints.

The military checkpoint procedure coming south was simple: come to a stop; smile; get flagged on.  Heading north on the other hand the procedure is a little more… formal.  As it came to our turn we weren’t sure what to expect.  Cars in front of us had each  spent about 15 minutes where the soldiers, opened their trunk, pulled a bag or two out and searched it followed by some talking to driver and passengers. Of course this was occurring 50 yards ahead and in Spanish. 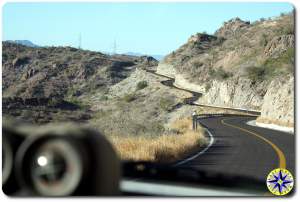 Our rig is a smuggler’s delight.  We’ve got stuff piled floor to ceiling front to back.  Two spare tires, bags of tools and recovery equipment, cardboard wrapped parts, foam filled cases for cameras, and video equipment, all buried by camping gear…  If some one wants to search everything, we could be here for hours… Several hours. 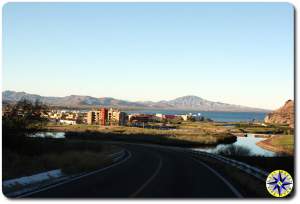 We came to a stop and greeted the armed soldier with a simple hola.  At this point a lot of spanish came from the young man flying by us at a NASCAR winning pace. Replying “no hablan español”, didn’t change the language but did slow the pace.  We had seen everyone before us get out… so we did the same exiting the rig all our papers in hand.  Several other soldiers were joining us now, two of whom spoke English.  While we waited quietly one climbed into the rig and started poking and pulling at stuff.  The soldiers who spoke English, now positioned next to us, began to ask the basic questions about where we came from, where we where going to, and how long had we been in Baja…  We stuck to our story, since it was true, that we had driven down from Seattle and were now on our way back.  It was pretty clear we were just dos amigos exploring the back roads and not some coked up cowboys sporting guns and alibis.  When they did pull out two cases asking what was inside I had to smile… I let them know one was our tire repair kit and the other our box of cigars.  My answer matched the contents and seemed to satisfy their curiosity as they told us politely we could go and wished us well. 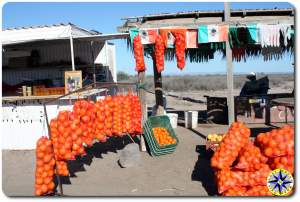 We would see two more checkpoints and they all went the same with the only exception being one soldier got a kick out of Hula Betty on the dash.  He poked her and smiled as she danced her little wiggle.  There was nothing intimidating about the checkpoints but we were never sure how long or deep the soldiers would dig into the gear during their inspection.  Just one more time consuming activity between us and our final destination.  Oh well, this is Baja and you’re not supposed to be in a hurry. 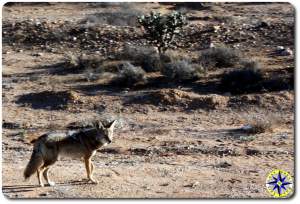 11:00 pm and we only made the minimum 700 km.  But after 13 hours on the road, San Ignacio was as far as we were going tonight.  And even though the only food available came in snack bags from the town’s market, we still enjoyed good company, a fine cigar and bourbon in the hotel’s quiet little courtyard under the stars.