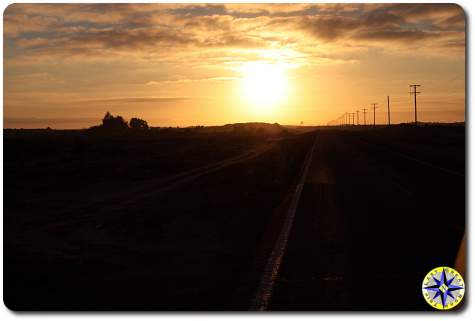 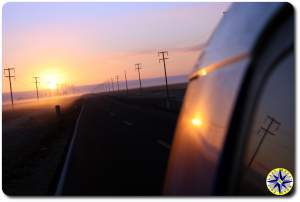 The sun is still sleeping but under the light of a lavender moon we are packing the rig and leaving the hotel parking lot.  Sitting behind the wheel, the stiffness in my body whispers to me that it would rather be under the warm covers we left behind.  But that wouldn’t be our way so we begin another day on this amazing adventure.

Cabo San Lucas now feels like a distant memory as San Diego’s siren song plays in my head, 700 miles of beat-up asphalt in between.  We are driving the Baja for what is probably our last time. 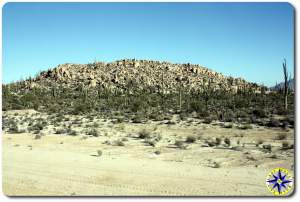 For an while now we’ve been driving alone on Mexico #1.  As the sun begins to wake, it takes back the dark, reveling blues, purples, yellows and orange.  It’s as if the Baja is painting our last day with its full color pallet.  Baja has surprised us everyday and this is no exception.

It seemed like hours before the first car appeared on the horizon.  We came down here looking for solitude and found it on many levels.  Even in a crowd, Baja has a way of letting you feel you have the land, the sea and the wide open sky all to yourself without the feeling of loneliness that can accompany the darkness of the closed in cities back home. 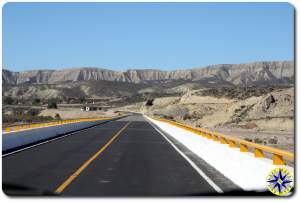 Growing up we would always play license plate bingo on long family road trips.  On this road trip we came up with our own version to help pass the miles.  In our version you select a sign and try to figure out what it means…  This works best if you don’t speak the language and as I’ve pointed out before, we don’t.  We figured out the signs that meant speed bump, “Topes”, “Reductor De Velocidad” means lots of speed bumps, although after the roads we’d traveled, they hardly garnered much of our attention.  Drive with caution, “Maneje Con Precaucion” usually proceeded a dip in the road designed to allow flash flood waters to pass.  But for the longest time “No Tire Basura” eluded us. We toyed with stupid answers like don’t leave tires, don’t burn tires. Our little iPhone translator app was no help and the Baja Gazette didn’t include it in the traffic signs it listed.  But at one of the military checkpoints, we caught a break.  While waiting our turn we noticed a woman walking with a couple of cups and bottles to throw them away in a trash barrel with a painted sign above that read basura. 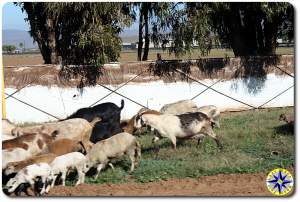 The winds in Baja have been cool and soft throughout our trip.  Even on the pacific coast where they kept the prayer flags at attention, they still possessed a refreshing feel. On the high plains today between the east and western mountains the sun is fueling the winds which are blowing consistently at us head on.  You’ve seen the rig and heard me kid about its aerodynamics but with the throttle wide open and the rig in fifth gear the most we can muster was 45 mph against the hot breath of the Baja.  The only thing having more trouble with the wind than us was the 18 wheeler we’d been crawling up on for a number of miles.  We may be topped out at 45 but he was grinding through the gears to make 40. 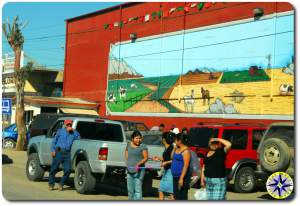 In NASCAR the racers draft behind each other to gain speed.  As we closed the gap and the 18 wheeler blocked out more of the wind the power began to return and I could feel big rig pulling us forward.  Rather than use this new found power band to push past, we tucked in close behind deciding to settle for a gas saving view of the dirty metal barn doors of its trailer.  We we’re not going that much slower and now we would be able to make the next Pemex station on the fuel left in the tank.  At 40 mph it wasn’t hard to keep our close distant while we chatted and watched the brush along the road vibrate like a tuning fork against the wind. 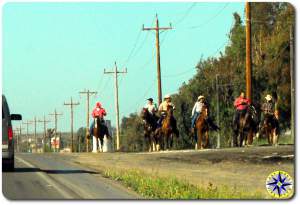 Apparently the trucker did not see the equitableness in this arrangement.  After a while he started to slow, 35 than  25, his left blinker flashed.  He wasn’t turning, he wanted us to pass.  We backed off a bit but still staying within the calm of his vacuum.  When the 18 wheeler came to a dead stop on the high way our bluff was called.  We pulled out around him, venture forward against the wind and before long worked our way back up to steady 45 mph with the throttle wide open. 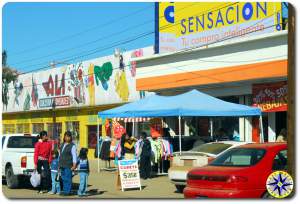 I tell you that story so I can tell you this.  We pulled off the highway to take a break and rid our body of excess fluids that were building up in our bladders. It took all my might to push the door open forcing it against the wind only to have it slam shut as I hope out and let the door go. Standing with the our backs to the rig using it as a wind block we stood in a cocoon of calm.

Men don’t spit into the wind, they don’t pull the mask of the old lone ranger and don’t pee on their shoes.  But if you’re not careful and the wind whips around the truck destroying the cone of safety…. Tears began to stream we were laughing so hard.  We could barely breath through the laughter and still hadn’t zipped our pants.  We’d gone from conquering heroes of the Baja to peeing like little boys a the urinal for the first time.  It’s good to laugh and not take ourselves too seriously.  After all we’re just a couple of friends lucky enough to be on a really sick road trip in Baja. 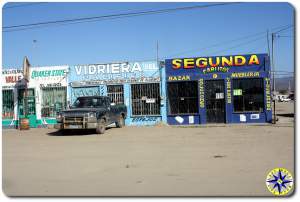 Finally escaping the wind’s punishing force we found ourselves in the familiar town of El Rosario sitting at Ma Ma’s staring down at a plate of lobster burritos.  We were still trying to wipe the smiles off our faces and pee off our shoes as we inhaled those tasty little sea food morsels of tortilla stuffed love.

Remember that small world thing.  As we were leaving  Ma Ma’s a tourist stopped us and asked about our rig.  He said his sister just purchased an Fj Cruiser and wanted to get into off-road adventures.  He asked if we had a card and than told us his sister lived in Seattle, about twenty miles from Hula Betty and me.  Is it just me or is the universe sending a message to us on this adventure?  Of course we no idea what that message is. 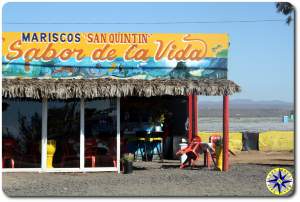 The towns and cities are becoming bigger and closer together now as we make our way north.  Unlike the villages, these cities are filled with people going through the tasks of their day.  The browns of the cactus filled deserts to the south are giving way to green valleys and rolling hills in northern Baja. Fences seem to be everywhere and the wide open spaces are starting to close. 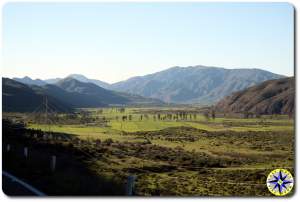 The daylight is beginning to slip away from us as we approach Ensenada.  We’ve put 600 miles behind us and still have a ways to go if we are going to reach the border today.  We kept pushing north disregarding the 65 km/h signs in favor of 90 km/h.  And on the toll road between Ensenada and Tijuana keeping up with traffic raised our speedometer to 120 km/h.

You know that time at dusk when it’s darkish?  Too dark to see everything clearly, too light for the headlights to help much.  That was the time day we rolled into Tijuana.  When we started this adventure and crossed into Mexico we took metal notes thinking that would make finding our way back easier. 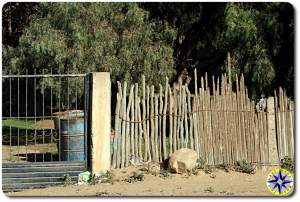 The sign said San Diego with an arrow pointed left.  But which left?  There were three slots separated by rows of jersey barriers and with traffic we had a split second to decide.  I can now tell you the middle slot is not the correct way to the border.  In fact if you stay on it you will end up back in Ensenada.  As we looped up on the overpass we could see the long lines of cars below waiting their turn to enter the USA.  There were dozens of lines with cars backed up for blocks. 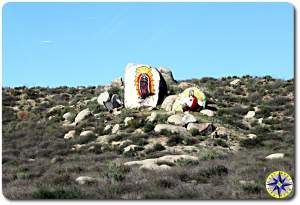 Finding the first opportunity to exit we positioned ourselves for another approach at the boarder.  At the sign marked San Diego we pulled into line…  only this line appeared too good to be true.  While cars to our left were stacked up frozen in time, we sat only four car lengths from the booth where an official would decide our fate.  The little sign reading fast pass indicated we did not belong here but the car behind us wasn’t going anywhere and the gaits on each side funneled us forward like cattle  to the slaughter.

Reaching the booth the officer informed us we had two options, pay a fine or receive a warning and go to secondary inspection.  After discovering the fine amounted to $5,000 we opted to serve time in secondary inspection.  Pulling forward we slowly motored the drive of shame with a large orange tag place on our windshield as border patrol officers barked out directions and pointed us to a parking slot. 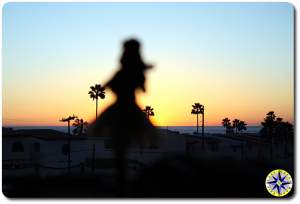 A young wet behind the ears officer came over and pulled our glowing neon orange tag.  You could see him fighting back a smile as he read the offense which had banished us to his little corner of bureaucracy.  Doing is best to look tough, I don’t think he was old enough to shave yet, he asked for our passport, vehicle registration and told us to wait. 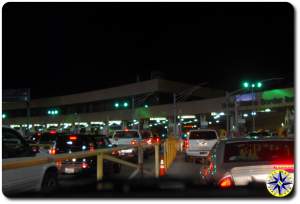 While we waited in our timeout, another officer rolled up a flat cart to the pickup parked to our left.  Lowering the tail gate, she proceeded to unload dozens of tequila bottles and boxes of cigars.  The guy in the pickup was trying to look cool while the two women passengers held a hand over their face to hide their smugglers shame.

Our officer returned, handed us our papers, asked us to sign a promise we wouldn’t cut the line again and said we could go.  Looking back it seemed like a fair trade; skip to the front of a three hour line for a 10 minute timeout.  We must be living right. 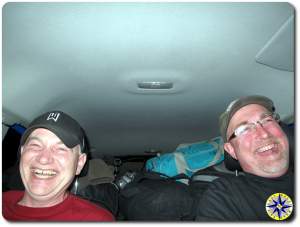 miles today and were back in the USA.  Even with its LA traffic and crowds there was something comforting and familiar about being on the northern side of the border.  Filled with a new found energy we continued north pushing past the LA area finding a hotel for the night.

Our time in Baja may have ended but its spirit remains.  We still have plenty of road trip adventure ahead of us to reach the Pacific North West and nothing will ever erase the memories of our time in Baja.