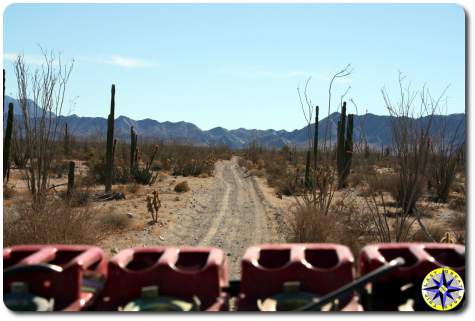 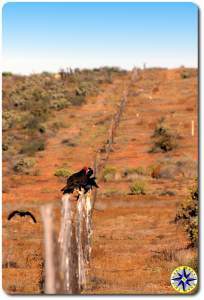 The night before we had come from the east, out of the northern mountains and down to the Pacific.  This morning we were setting out, back across the Baja into the rising sun and the hills a few hundred kilometers to the south of where we were two days ago.

The landscape is changing, moving away from rugged brush covered mountains into the high plains desert.  Cactus is becoming as common as the scraggly scrub brush replacing the green shrubs and trees of the north.  The terrain is taking on the brown tones of a tanned land bathed in a sun which rises and sets in a cloudless blue ski. 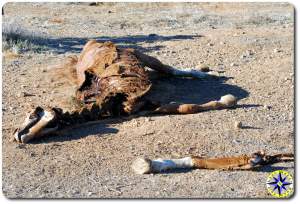 This is not a land for the old and weak. The vultures circle above searching for death. Crows announce it’s presence when they encounter a loser in the battle for life.  The land is harsh and death is everywhere.  A mistake out here can cost more than a tow truck ride back into town.

Not more than five minutes out and we came across a carcass that testified to the dangers of driving at night when livestock grazes or rests along the roadside.  “When do cattle learn not to rest on the road?” “Right before they are hit by the truck!” 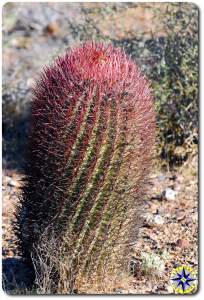 When we first saw the decaying horse it was covered by vultures, its severed leg and crushed spine attested to its loosing battle with a truck.  The vultures were hunkered down on the body, defending their place on its bones.  Their featherless, brilliant red heads darting up and down as they pick at the edges of the torn leather searching for scraps of flesh.

Everything has thorns and actively defends itself.  A walk on either side of the trail is a exercise in caution to avoid the stickers which seem to reach out and grab anything that walks by.

And yet in the harsh, arid landscape there is tremendous beauty.  Though the land is dry the cactus appears succulent and full, opening a pallet of green painted against the browns and grays of the land.  Thorns that can pierce flesh and cut through a tin can faster than a ginsu knife glow an amazingly vibrant red in the morning sun. 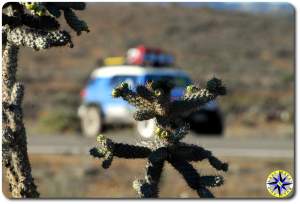 Silhouetted against the brilliant blues of the clear desert sky, even a small splash of color jumps out filling the imagination of tropical plants and vines.

The juxtaposition of death and beauty reminded me of how fragile life is, how every moment holds a wealth of emotion.  Whether we see joy or sorrow depends on our perspective and what we choose to see. 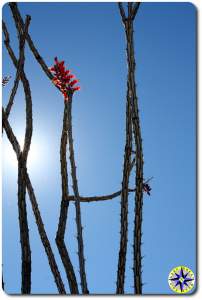 The road would change texture many times today.  Going from tarmac, to gravel to sand and back again.  What didn’t seem to change is that course was always going straight, forever.  The race course uses stretches of Mex #1, the main highway through the Baja, to connect the off-road sections.  This morning took us on a long stretch of empty highway allowing us to make good time.  Brad checked the hand-held GPS which showed us running directly on the course.  This highway section would take us some 80 kilometers to a gravel turn off  and back into the mountains.

Cruising with our windows down, cool morning breezes blowing in and the iPod blasting, we were dos Estadounidenses running free.  This is a feeling that can only come from from a mix of equal parts friendship, solitude, challenge and accomplishment.  At this moment we were Kings of Baja. 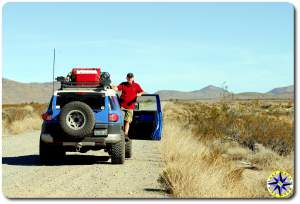 The GPS signaled our departure from the tarmac as we approach one of the many Pacifico shakes that dot the highways and act rest areas.  Turning off onto a long straight away of gravel we stopped to stretch and take in the course before us.

Sitting on the cusp between dirt, gravel and asphalt the rig was ready for the course ahead.  We took this time to hydrate and snack on Dora-Yaki, a carbohydrate sugar buzz made from sweet red bean paste slathered between two pancakes.  As we stood outside the rig drinking, eating and enjoying the warmth of the morning sun, two motorcycles came slowly down from the trail before us.  Nodding as they slowly passed, their worn bags strapped to the back and dust covered leathers hinted to what lay in store for us. 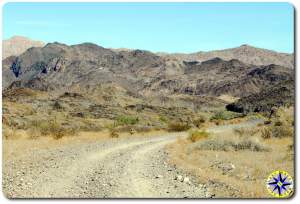 This was more inline with what we expected.  The washboard road stretched out before us.  At ten miles an hour the ruts put the rig into a kidney punishing ride that had everything inside chattering as the bumps loosened the tie-downs.  At 35 miles per hour the rig achieved a harmonic balance in which everything sat in a zen like trance, slightly shaking but without rattles or bangs.  Sure the racers shoot down this stretch at 110, but for us 35 mph was a new course record. 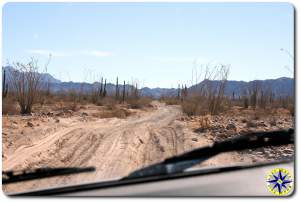 If there is one true statement about the Baja, it is that nothing stays the same.  If you don’t like the terrain, just keep driving.  The conditions will change, whether you want it too or not.

Driving out over the first set of hills placed us on a high, flat, desert plateau where before us, across miles of flat land, stood the taller mountains we would traverse once again to the Sea Of Cortez.  The course too was changing before us.  The washboard gravel, that in retrospect, looked like a wonderfully maintained cobble stone path gave way to sandy washes and mixes of hard rocky stretches. 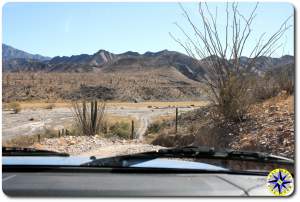 Driving now became a exercise in find a harmonic balance on the hard pan, punctuated by slamming on the brakes to reduce our speed to a crawl at the first sign of sandy washes.  This method of driving was discovered by accident of course.  Our first attempt to maintain speed through a sandy washout section transformed the rig into a bucking bronco which appeared to go on well beyond the eight second ride time. 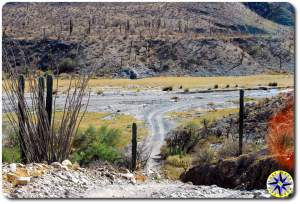 Buddhist doctrine discusses change and how we must learn to adapt.   Stand in the way of change and you will be run over by it.  Flow with it like droplets of water and you will be move swiftly to the sea of tranquility.  We adapted, after all by now surely we’d seen all the different terrains the Baja had in store for us.

At the end of the plateau, approaching the mountains, we assumed we would be climbing back over on the same rock encrusted gnarly paths that we had encountered the day before.  We all know what assume means.

2 thoughts on “Baja Adventure Part 4 – Run To The East”