When I first started planning this Baja off-road adventure I imagined camping in the desert wilderness, enjoying gourmet meals cooked on a little green two burner Coleman stove, sipping coffee from a tin cup, warming myself by the fire, sleeping under the stars and listening to the undeniable sound of silence.

We’ve been staying in little motels!  I’m not complaining mind you.  A clean room, soft beds and hot showers after a long hard day on the trail is an undeniable luxury.  Motels have made our progress possible.  We drive past dark and hit the road early.  We don’t have to set up camp, tear down, cook or look for fire wood.  We’ve been driving hard on an extremely tough course and I appreciate the comforts.  But dammit, I want to camp.

On the west, the pacific hurls waves and wind at the shore, stirring up surf and sand as it works to reshape the coastline.  On the eastern side of Baja, the Sea of Cortez’s blue water quietly laps away the coyote tracks in the sand as it strains to follow the rhythmic song of the moon’s pull.  Bahía de los Ángeles is the end of the road, a large, island filled lagoon, a third of the way down the coast of the Sea of Cortez.  Tonight, we camp! 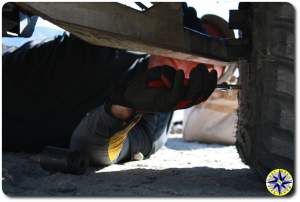 We made good time driving today managing to stay on course. We’d reached our destination for the night with the sun still above the mountains to the west.  After refueling at the last Pemex we’d see for another 200 miles, we left the asphalt heading down to the end of the bay.  It didn’t take long to drive the dirt road through this little fishing village.  In less than two city blocks the fruit stand, fishing boats, torn nets, market, tar paper shacks and sleepy dogs were behind us. 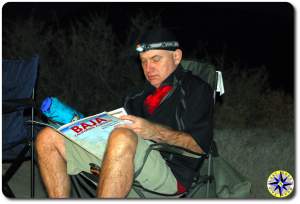 As we drove past the last shack we started looking for a trail or opening through the brush that would lead us down to the water.  At the end of the bay we spotted our opening and turned the rig toward the sea.  Serpentining our way through the low dunes put us onto the dried mud flats that opened to the shore.  We could see we where going to be alone tonight and had our choice of where to set camp.  It’s not like there are assigned spots, THIS is Baja.   And tonight, this is our beach.  Unsure of the tides here, we picked the top of a little dune at the waters edge. 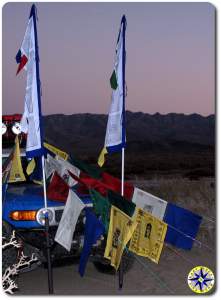 We went about quickly setting camp.  Even though we still had light, in the Baja night comes quickly.  Unpacking the rig, pitching our tent (well three sides of a tent), assembling cots, camp chairs,   getting the kitchen prepped, reviewing tomorrows route, and raising the prayer flags.

Buddhist prayer flags are used throughout Tibet, India and Napal to promote peace, compassion, strength, and wisdom. Unlike Christian prayers, the flags do not carry prayers to gods; rather, the prayers (mantras) are intended to be whisked by the wind, spreading good will and compassion throughout the world.

There is a belief that once the prayers of the flags are caught by the wind they become a permanent part of the universe combating fear, hatred and pain.  For many, raising prayer flags symbolizes a welcoming of life’s changes and an acceptance that all beings are part of a greater ongoing cycle. 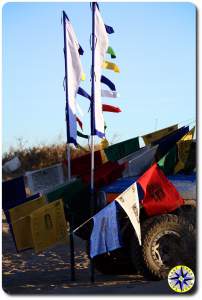 While I’m not Buddhist, I do like the idea of adding peace and compassion to the karmic soup we all swim in.  It also reminds me that whatever this adventure, or life, throws at me, I’m a luck man.

I don’t know whether it was the still night air, the prayer flags, the distant coyote howls or that my blood sugar was crashing from not eating all day but a wave of melancholiness began to wash over me.  I’ve been given a life filled with amazing family and friends.  I’ve traveled the world and seen many of its riches as well as its poverty.  I’ve worked with brilliant business execs, watched great artists create beauty and listened to scholars without intellectual equals debate.  And in the Baja, I pondered “why”.  Why me. 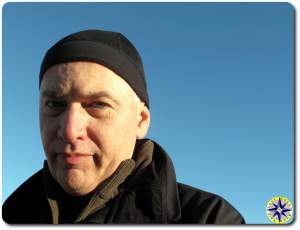 Not why poor me…  But why have I been so lucky.  Why weren’t the struggling fishermen up the beach given the same opportunities?  Why is their famine, plague and sorrow?  If it is all just luck, will it run out some day?  Why can’t I release this need to control my luck…

I wont bother to drag you into the traumatic melodrama that played out in my head as I continued about camp duties.   But I will say, in the end I accepted that I’m lucky, that change is constant and while I’m afforded opportunities I’ll try to share them with others.

Three weeks before, when planning the meals for this adventure (remember, I intended to camp every night) Brad mocked me when I asked if he enjoyed Indian cuisine? Apparently Brad, his family, my family and all our other friends thought it was funny that we would be in Baja, Mexico and I was planning to cook Indian.  Tonight I served  a kettle of Indian black tea, chicken tikka masala, aloo palak and brown rich, followed by coffee, biscotti di Prato and our usual fine cigar and glass of bourbon (ok tin cup of bourbon).  Who’s laughing now!

As we turned in for the night, we realized we hadn’t been using our headlamps.  The moon was full, dazzling bright and close enough to touch.  The bright moon didn’t leave much room for stars but bathed everything a soft light, giving the bay a freshly washed look; brightly visible without the reflective glare of the sun.  In this strange light the hills to east and west of us appeared within easy reach, if we could just raise our tired, old bones from our cots and gravity’s grip. 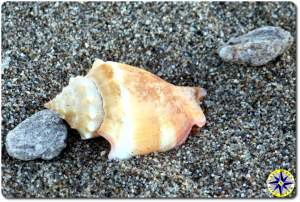 On a still night, when you remove the white noise of civilization, the whispers of nature become crisp and clear, filling the voids left behind.  Laying on our cots, we were 30 yards from the sea and a good 20 feet above it.  Yet, it was all I could do not to keep checking if tide had crept up on our camp.  The soft waves of the sea sounded as if they were lapping at our feet, submerging everything we owned.  The solitary seal’s occasional barks would temporarily brake the round robin of coyote howls as they talked to each other from the hills around us.    Even the distant splashes from out at sea seemed to join this jazz session of nature which filled our hearts as we drifted off to sleep, bundled in our bags trying to repel the 40 degree desert chill.

Brad is a morning person.  Me not so much.

Camp mornings are magical and the cries of gulls, howling coyotes and barking seals ensured the sun’s warm rays would draw me out early this morning.

The air hadn’t warmed up much this morning.  Everything had a cool, crispness about it and the smell of a new day filled my lungs.  The glow of the lagoon this morning was just as spectacular as the long shadows had been the evening before.  All around the camp were the fresh prints of the coyotes who had visited in the night.

But none of this interested me now.  I wanted caffeine; hot coffee and lots of it.

As the caffeine kicked in, I was overwhelmed as the raw beauty of this lagoon washed over me.  I can’t begin to describe, pictures don’t capture and video is too small for the blues of the water, the browns of the hills, the stillness of the air and the soft textures of the sand beneath my boots.  2,000 miles away from when we first started planning our crazy adventure, this morning was everything I had dreamed of. 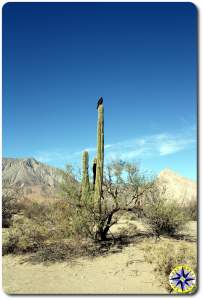 The hardest thing for me is to break camp.  It’s not particularly difficult or time consuming but it signifies the end of a lazy morning.  As Brad began to tear down camp I went through my morning rig inspection routine.  After the river bed episode yesterday (as it later became known as), this mornings inspection involved paying a little more attention to the ball joints and front suspension.  The rig still seemed strong and just to make sure everything articulated freely, I gave a few sprays of grease to the suspension’s moving parts as Brad finish packing up our lives.

Before leaving we took one last look around, drawing it all in as we started down the route.  No longer assuming we had any idea of what the Baja would throw at us we embarked down the course welcoming whatever change the day held in store.