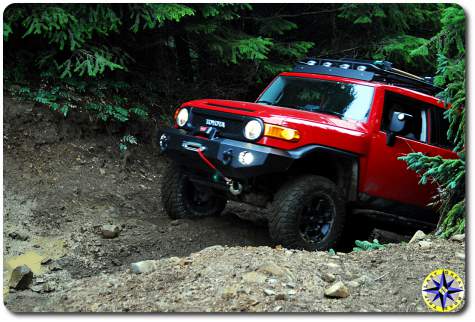 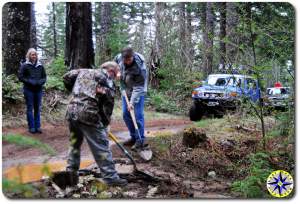 This is not a flash back tribute to 80’s rocker, Pat Travers. It’s the annual Northwest Fj Cruiser Club’s midnight 4×4 trail adventure.  And like most things that go bump in the night, this off-road adventure had its ups, downs and a bang…

The NWFJCC Bad Moon Rising off-road adventure is held every spring under a full moon.  4WD rigs descend from all over Oregon and Washington, driving 100’s of miles to participate in this annual event that offers a chance to explore some of the Tillamook State Forest trials (TFS) before and after the sun goes down.

For a while now, work has really put a cramp on our off-road adventures…  long work weeks spilling into the weekends and travel, have left little time to explore the road less traveled.  Not that we’re complaining about having work, since many folks out there have it much worse.  But it was time to get out and wheel.

The meetup for TSF runs is a local McDonald’s parking lot just outside of Portland where everyone gets the chance to catch up with old friends and meet new members.  Rolling up early, we were happy to find a few old faces in the parking lot who immediately greeted us with an extended hand and a smile, reminding us of past good times with the club.

After a few Big Macs were gobbled down and everyone accounted for, it was time to move the convoy to the trail head, further down the highway toward the coast.

No matter how hard you try, it doesn’t take long for a dozen rigs to get strung out.   Once on the highway, we shouted “cop on the left” over the CB but the folks in the back didn’t get the message and in their hurry to catch up, set off the all sorts of speed trap alarms and police cruiser lights…  Tail Gunner was busted!  Luckily a clean record and good speeding Karma allowed Curtis to drive away with just a cautionary word and soon caught up with the convoy some 20 miles down the road where everyone was fueling up and purchasing OHV permits. 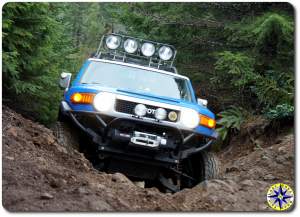 Some folks have the misconception that four wheelers, rip through the woods, tossing out beer cans and tearing up bushes as they trash the trails….  Nothing could be further from the truth.  Most of us are responsible wheelers, sticking to the designated trails and keep a trash bag handy to pick up litter in an effort to preserve the land for everyone to use.  The club takes great pride in its adoption of the Hood Raiser trail and the first hour or so of this event was spent working on the trail to clean up debris and  maintain the water-bars that keep the trails well drained.

We’ve wheeled TFS a number of times…  previous night runs, Bill Burke training, Black Friday runs…  but it is never the same.  Dirt and rock give way and shift each year as the northwest rain and snow work against the earth. And for some reason this time TSF seemed to perplex me on several of the trails.

Hog’s Back is a short steep climb ending with a rutty dug out  obstacle before cresting the hill. The line I picked this time put our wheels in all the wrong places for going up and over the last twenty feet.  After another failed attempt, I gave a shout out for a spot and received the guidance needed to make it to the top.  The other drivers made it look easy. 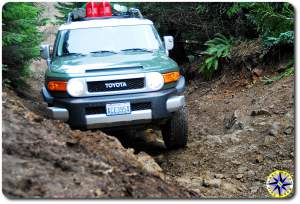 Driving off-road in the dark is unlike anything else you will ever experience in a 4WD vehicle.  Amazing twinkling starts, trees glowing in the moon light and the sound of the night. But the dark can also masquerade obstacles. making holes and ruts disappear into the shadows like monsters hiding under the bed.  The great part about going out with the club is the support you get from others when you need help to get unstuck.  One of the rigs, about half way through the convoy found one of those holes hiding just behind a tree root and in front of an incline.  Pinned up within inches of a tree, the rig could not move forward or back without risking carnage from gravity’s effort to close that final inch between quarter panel and tree.

The getting unstuck procedure is simple: The driver remains in the rig, maintaining control over it, while others assess the situation and determine the best course of action. With headlamps adorned, spotters kept an eye on the tree as others had the driver turn the wheels back and forth to see if a simple tire repositioning might deliver the needed traction, without impaling the rig on the tree. The rig was stuck…  and stuck in a spot on the trail where pulling it out with a strap was not possible.

Ever wandered why off-roads carry those big hi-lift jacks?  It is not the best tool to change a flat tire or crack walnuts.  It is however, the perfect tool to lift a wheel high into the air so that you can stack rocks or downed tree limbs under the tire to provide better traction and drive out of a deep whole.  But lifting the wheel high enough to stack rocks under it, when mud is all around and the rig wants to lean into a tree can be a bit unnerving.  Careful coordination, several logs stuff under the wheel and the efforts a few veteran spotters had Jeff cautiously easing his rig forward, without injury.

Further down the trail, fortunes were turning for the worse.  The BJ60 is a shortish wheel base rig but Toyota gave it an extra long ass hanging off the back.  Following Chris in his BJ was exhilarating as he skillfully pirouetted his diesel rig through the tight twist and turns.  The rig’s long travel allowed it to gracefully sway as it lifted and dropped its wheels over the rocks.  But as I watched him take the rig down through a tight obstacle, the rear wheel went bump and the tail end went bang…  just a little…  but enough.  The back end of the quarter panel found a tree trunk leaning out into the trail.  Just a ding, but still a scar that will need to be pulled out and painted to bring the old BJ60 back to her original beauty.

Looking to avoid combat with that belligerent overgrown fern, which now had a taste for paint and metal, I moved the  Blue Bunny as far to the other side of the trail as possible.  If the tree was the frying pan, than where I put the rig was hell’s own inferno.  The rig was moving slowly down hill as the passenger side started to rise while the driver’s side began to dip.  Each forward revolution of the wheel put the rig further off camber until it was clear that if I didn’t change this line, the situation was going to get catastrophic.

Time slows down as the brain goes into survival mode.  By now Hula Betty had a severe lean off her dashboard perch and my pucker factor meter was somewhere up in my throat, cutting off the air supply to my larynx making it impossible to express out loud all the four-letter words that were racing across my brain’s synapses.

Still rolling forward, gravity was pulling over on the rig as I turn hard into the off camber lean, trying to come down off the passenger side obstacle. I don’t know whether it was clean living (it’s not that clean), the prayer flags or sheer dumb luck but the rig began to slowly right itself as we maintained the steedy downhill turn.  Back on level ground, I took a breath, double checked my shorts and took stock.  I had picked a bad line and it almost cost me.  You can’t take anything for granted on the trail. 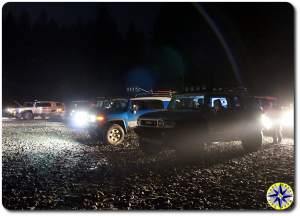 The remainder of the trail was uneventful as the convoy of rigs motored back to the parking area where we everyone chatted about the trails, aired up and started to plan the next wheeling event.

After midnight and the fog had closed in, holding all of us in a cold damp bear hug as drivers milled about saying their final goodbyes.  The original plan was to camp over in TSF.   Some might say I was trying to recapture my youth by reliving my all-nighter college road trip days.  But between the damp chilly air and overload of adrenaline coursing through my veins, driving through the night back up to Seattle seemed like the thing to do.  Besides, the thought of a warm bed and clean sheets was hard to shake as I looked around at the muddy ground.  Jeff decided to follow my lead and drive up to Seattle with us, insuring there would be conversation over the CB to fight back any tired feeling.

I5 from PDX to SEA is pretty barren in the wee hours and we were cruising at an steady pace. When we  hit Centralia, WA the Denny’s sign called us in with the promise of pie.  You can’t really go to Denny’s and not order breakfast, so pie gave way to some sort of bacon, sausage, scrambler mix with hash browns…  Oh I love those Denny’s hash browns.  Jeff and I talked over coffee and late night (or early morning) breakfast.  We shared a few tales of our past, talking about this, that and what not.  I enjoyed a good breakfast, achieved a little caffeine buzz and learned a little more about one of the good guys I know, but never did get pie. 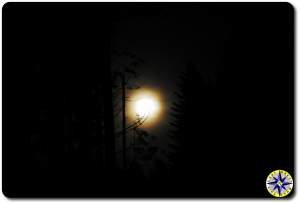 40 minutes farther north on I5, Jeff and I parted as we both made our ways home.  By the time Hula Betty and I pulled into the driveway, the sun was up, birds were singing and early church goes were pulling out of the neighborhood. Laying my head on the pillow I thought about how lucky I was…  Not for avoiding a roll-over (yes that was really, really, really, really, lucky), but for the good friends I have, my family and the fact I’m able to have an off-road adventure when so many others are doing all they can just to make the mortgage.

Special thanks to Tilly for several of the photos posted here.