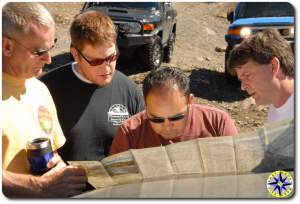 6:45 a.m. and the sun is screaming at me through the blinds, yelling to get up and go on this off-road adventure…  We were already late if we were going to be in Enumclaw by 8:30 a.m.  The drive to a trail run meetup for us is always a combination of caffeine, anticipation,  iPod shuffling and mental spring cleaning.  This was no exception. 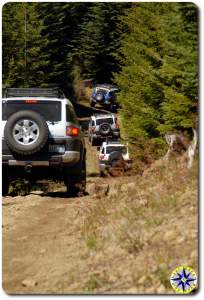 It has been awhile since we’d run with the NWFJCC…  with anyone for that matter… and this was going to be and easy day of exploring forest roads with several new folks who’d be making their maiden run with the club.

The plan was to head up forest road 70 and than see what happens.  Maybe take a side road that looks interesting or head up to a lookout station or two.  What wasn’t planned for was snow!  After all this is June and we were only at 2,500 ft.  But the snow was there and it marked the end of exploring 70.  Now we were going off the map. 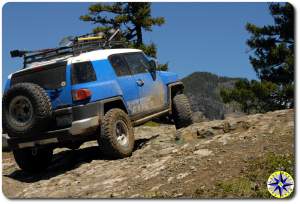 Off-road exploring is fun…  lots of stops and starts, heading down a trail spur only to find out it dead ends 100 yards from where it starts and turning around a parade of FJ Cruiser on a two track.  The poking around paid off as we found some hills, great views and a little mud.  It also let us spend time with everyone comparing rigs, discussing the merits of this mod or that one, hearing stories of ex-wives, kids, family dogs and the tails that are on each persons must run check list. 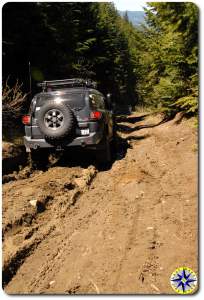 If you follow the blog (and I hope you do) you may remember the Greenwater area from our winter dog sled adventure.  It rests in the shadow of Mount Rainer offering post card photo ops of the snow covered mountain with swaths of green filling the hills and blue sky above.  The Naches trail cuts through the hills but remains closed until mid-July leaving us to only dream as we crossed it several times during the day.

Even though we spent all day on the back roads exploring, club runs always seem too short.  With the sun still warming the hoods of our FJ Cruisers, we said good bye to our old and new friends as everyone realized dinner time was approaching. 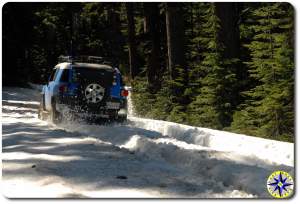 The drive home gave us time to reflected on how lucky we are to be a part of this club and also start planning to attend the next club run of the Naches trail.