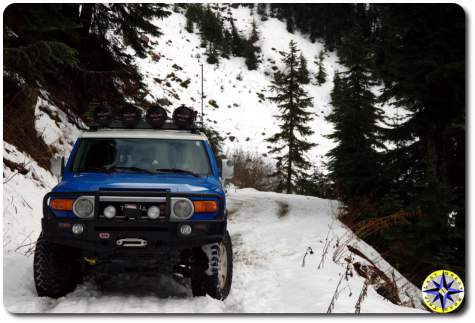 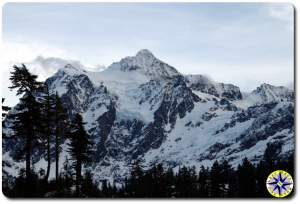 When you grow up in Oklahoma it is hard not to eat, breath and sleep Sooner football.  This also means you dedicate Saturday’s to the gridiron and make sacrifices including pushing off family reunions, funerals, and off-road adventure opportunities.  Well with Oklahoma positioned for the national championship, it was time to celebrate with trip into the back woods.

I’ve long wanted to return to the Mt. Baker area and see the mountains as they take on that first coat of snow.  The cold weather usually keeps the crowds at bay when there is not quit enough of the white stuff to ski down.  And I knew there would be an old logging road or two to explore along the way. It was just a matter of getting a little Barbie Doll size coat for that Iconic dashboard copilot of mine, Hula Betty.

The morning started out as you would expect in November, dark and drizzly fog with a chance of rain and clouds the rest of the day (note to self: change the rubber on the windshield wipers they’re getting loud).  The first leg of most adventures for us is by ferry over to the east side of Puget Sound where the rest of the state of Washington begins.  The ferry boat ride is also great time to grab a cup of coffee, wake up and double check everything is where I thought it would be.  And as my wife will tell you I always forget something.  This time it was tire chains (more about what that cost me later). 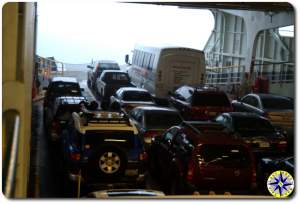 Only thirty minutes later and we were driving back onto to dry land, heading north on I5, where in Bellingham we shoot east on 542 heading to Mt. Baker.  As soon as you get off I5 you start to feel the change in time as strip malls are replaced by little country stores and swap meets.  You also trade in the straight gray concrete for the winding tarmac that follows the bends of rivers with names like Nookshook, Iceberg lake or even Thompson creek.  And as we wound along these living, breathing, moving water ways the road began to feel like our own with only the occasional car passing the other way. The rest stops on the back roads have all the cool stuff, including one of the largest Western Red Ceder stumps. 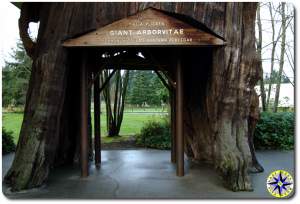 Twin Lakes is a beautiful base camp area set just below Winchester and Mount Larrabee at around 5,200 feet  Having scrambled up these two in the past I knew the road up was a fairly well maintained logging road that can get washed out but usually remains passable.  As we turned off 542 and hit the dirt the drizzle stopped and day was looking up.  The road was as I remembered and we made good time for the first 4.5 miles or so as we passed the Tomyhoi Lake/Yellow Aster Butte trail head. The forest service describes the next section as “not maintained for passenger vehicles. Those persons with a 4-wheel drive high clearance vehicle may be able to continue the remaining 2 miles to Twin Lakes”.  It was here that we came out of the trees into the clearings and the wet damp turned into icy crust.  The snow that remained had clearly been thawed compacted and refrozen a couple of times forming crunchy ice that immediately slowed us down. 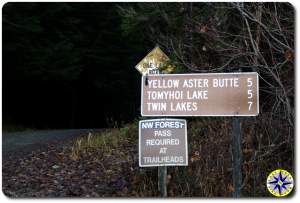 Motoring on through the white crunchy stuff we came to the switchbacks.  It was at this point we start to understand physics as the rig moved more sideways than forward.  Progress became, back up a few feet, drive forward ten feet and repeat.  Remember those chains I forgot… Hula Betty’s view from the dash gave her a clear sense of how steep the drop was as we would slide toward the down hill side of the trail.  I swear she quivered in fear a little.

With no chains, no other rigs around and the trail getting steeper we decided to call it.  But that meant backing down the steep trail to that last turn in the switchback in order to point the rig in the right direction. Oh those big beautiful mirrors.  We worked our way backwards to the turn, then facing correctly down hill, headed back following the tracks we laid coming up.

On the way down we had the good fortune to make some new friends. We met up with a family, who had come up to see the snow…  for the first time.  Mom and one of their sons recently arrived from the Philippines and this was a chance for the whole family to enjoy making snow men and pick out a Christmas tree.  They all seemed to really enjoy spending time together and I enjoyed hearing how they met had on the Internet and recently wed. 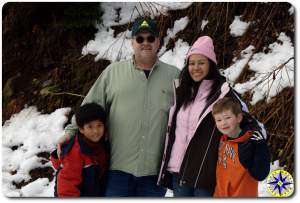 The rest of the ride down the trail went quickly with a few stops to enjoy a the sites and sounds of the woods.  Once off the trail it was on to the ski area of Mt. Baker.  The winding tarmac leading up the mountain was lined with poles set by the Department of Transportation to mark the edge when the heavy winter snows come.  Arriving at the top we were treated to amazing views of Mount Shuksan as I sat by the frozen lake (Hula Betty opted to say in the rig).  The bench by the lake provided a short moment of solitude to contemplate how similar we all are in our desires to raise a happy healthy family.  Staring up at a glacier covered rock the size of Manhattan, you can’t help but put life into perspective. 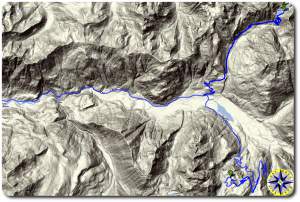 On the way up we spotted a little back road leading off to no where, so on the way down we added it to our list of places we would explore.  This little dirt road went on for a couple of miles with clearing offering views of Cascade peaks hidden from view previously.  And as a bonus, it ended in a place with a nice wall climb.  It wasn’t the climb that presented the challenge, it was the landing at the top, which was just large enough to almost hold a rig.  Once on top, it took a little maneuvering to point the rig back down without getting too off camber.  The little climb gave us back the machismo lost on the snow covered switchbacks. 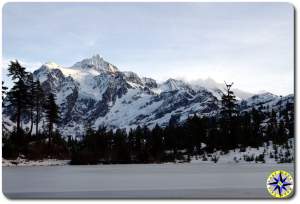 Driving back to the ferry Hula Betty reminded me (I know she not real but it is better than talking to myself and she is stuck to the dash so she is not going anywhere) how lucky I am to have the opportunity to explore this area and meet others with diverse backgrounds and stories of their own.