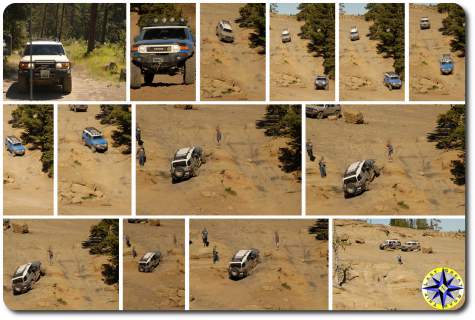 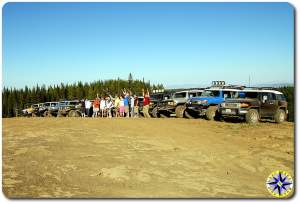 You drive enough off-road trails and you notice one thing…  There are a lot of Jeeps out there…   a lot.  CJs, YJ, JKs…  lots of cool rigs that folks modded up for the 4×4 trails. Let’s face it, a lot of the trails are open and available to all of us because of the Jeep guys and the work they have done to keep them available to the wheeling public.

So when you see a dozen Toyota FJ Cruisers on the trail, lined up like pretty maids all in a row, you get a second or even a third look from folks.  One Jeep guy we passed going the other way even gave me a high five (there is not much room on the trail to pass so yeah you can touch) as he exclaimed, “Cool…  looks like a Toyota commercial”.  Yup this was a FJ Cruiser take over…  and one hell of a good time. 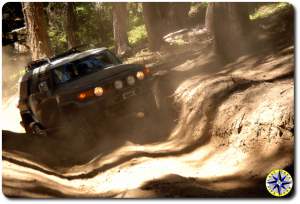 A lot of folks from the club came out for this run with a wide range of skill levels.  In order to keep the groups manageable our tail master had arrange to split the group into two.  One group would explore the fire roads and easier trials while the other tackled more complex stuff.  We decided to go with the latter. 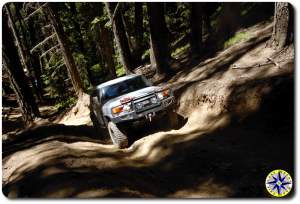 The complex stuff meant some heavily rutted areas, Aardvark Hill and some mud bogs that had the consistency of wet cement and smelled like a high school football teams rancid jock straps stuffed into a gym bag and left in the trunk on a hot summer day. Don’t ask how I know…  just take my word on it…  it stunk. 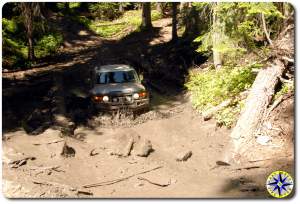 Aardvark Hill was the first challenge where the  crew thought it best to get out and walk the hill.  100 plus yards long on a steep incline, filled with roots and dug out ruts.  Most of it looked pretty straight forward but there was one area where you could see getting stuck was a real possibility and the only thing more ominous than getting stuck half way up was going to be in reverse and backing down.  If you choose that route it was make it or winch over…  just don’t go back. 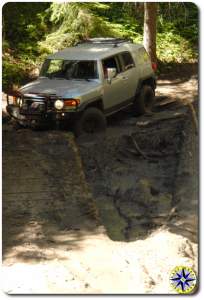 The nice part about going on this run was that Bernd was able to join.  You might remember Bernd and his son from our Rubicon off-road adventure.  Bernd is one of those guys who has a confidence on the trail that comes from years of wheeling, knowing his rig and knowing how to drive it.  Bernd looked at the hill, looked at the problem in the middle and decided if he came at it staying to the left and put is front bumper into left side of the hill, his momentum would carry his back-end up and over putting him on the line for the rest of the climb.  And sure enough watching him make it look easy inspired the rest to give it a try.  Bernd had paved the way, the rest of folks followed his line…  Like I said, it was nice that Bernd could join the run.

When it came to the mud you could go left, hug the edge and than pop up on to what was left of a bridge or you could face it straight on.  Either way you were going to stir up a swarm of angry mosquitoes.

We worked our way back up to funny rock where we met up with the other group and played on the rocks again.  We also worked over to moon rock to take a peak at some of the other rigs.  We sat on the sidelines at moon rock where it was more of a spectators sport leaving it to the truggies and rock crawler rigs.  You have to remember…  some guys build their junk to trash on the rock and driving over your buddy’s hood is just another day on the rocks. 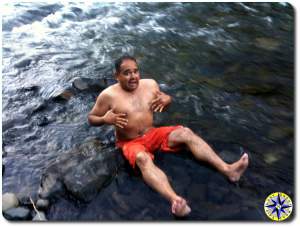 Three days of off-road adventure trail dust, smokey fires, sweaty cloths, sleeping bags, bug spray and it was way too clear…  everyone was getting a little campy.  We STUNK like a dead skunk in the middle of the road (remember that song…  you got yer dead cat and you got yer dead dog.  On a moonlight night you got yer dead toad frog.  Got yer dead rabbit and yer dead raccoon.  The blood and the guts they’re gonna make you swoon! Ok back to the present).  Luckily the Crow Creek camp was named that for a reason…  cold running water, a little soap, yes biodegradable, and a quick dip…  Bright, clean and neat ready to dress for dinner and another night around the camp fire.

Need more pictures??!!  Check out off-road adventure on Flickr for more from day 3.