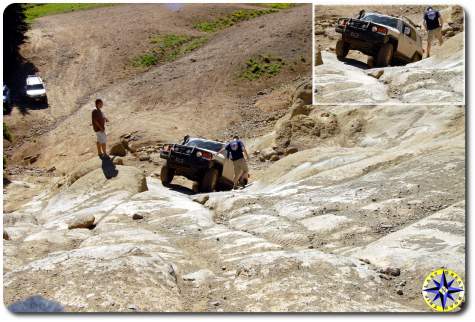 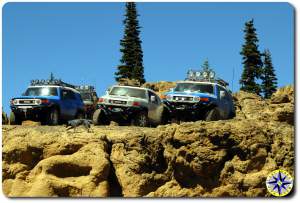 Moon Rock…  Funny Rock… sounds more like Stanley Kubrick’s “2001: A Space Odyssey” than an off-road adventure destination.  But that was exactly where we were going to scout out off-road trails.

Sleeping under the stars means there are no shades or curtains to keep the sun from crashing in on you as soon as it crests the mountain tops.  First things first after shaking off the chill and relinquishing my grip on the idea of sleeping in, was digging through the meal sack for breakfast… doesn’t camp coffee always taste better?  I know Starbucks can build you a custom double tall, half caf, skinny, mocha, macchiato with just a hint of Madagascar cinnamon. But somehow water boiling on a camp stove that is pored into a crusty tin mug filled with two scoops of instant seems to taste that much better when its mixed with a stick from off the ground and sipped sitting on a rock. 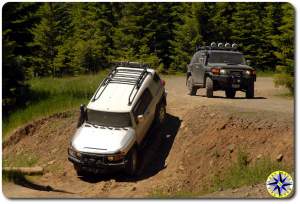 The club planned on running trail six something or another, I’m terrible with numbers.  So today the plan was to explore the trail making sure it was passable and poke around some other trails to see where we could find some interesting obstacles to tackle.

The trails in the Naches area are tight and keep your attention.  But when they open up…  they really open up.  Wheeling the west side of the cast Cascades means mud, tree roots, and hills.  Wheeling the Naches area gives you plenty of deep rutted hills and exposed roots but it also gives you rock…  the kind of rock that you can test your flex as you crawl up to the top.  Funny rock was exactly that.  The wide open meadow filled with shale and wildflowers pointed the way to a fun rock climb. 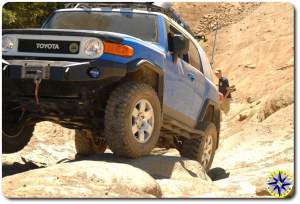 There was even a shelf that has caused its share of carnage.  Although Brandon attempted the shelf, after several tries and a few tippy moments he decided this one might be better left unfinished.  After all tomorrow is another day…  and we would be back.

By the time we rolled back into camp the rest of the club had arrived.  Camp fires are where the bonds of friendship are forged.  This night there were folks from Coeur d’Alene, Seattle, Portland and a few places in between…  engaged couples, married couples, brothers, cops, software engineers, entrepreneurs and even an old guy or two on a weekend pass. Before long everyone was telling stories and explaining how in the world they got into wheeling.  If you ever wondered… No, no one goes into the dealership and says… “I’d like to spend $30k on a really nice rig, dump another $10k in mods and than put my it in harms way”.  Usually the stories that came out were more like “I wanted a 4×4 rig to go camping and fishing…  but I met up with the club and started doing more and more difficult stuff”. 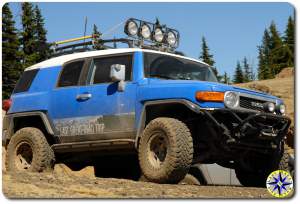 But no matter who they were or how they got here…  having everyone around the fire made the evening amazing.  Of course as usual, the crowd thinned out, the sky got darker, the stars shined brighter and the conversation deteriorated.  It wasn’t long before talk turned to man-mellows, man camp, and host of other topics that seem funnier 10 beers into the night.

In the glow of waning embers we said our final good nights and headed for the cot, knowing tomorrow we would have the chance to spend time on the trails with some of the nicest folks around and just maybe get a few more pictures to share and some video of who knows what.