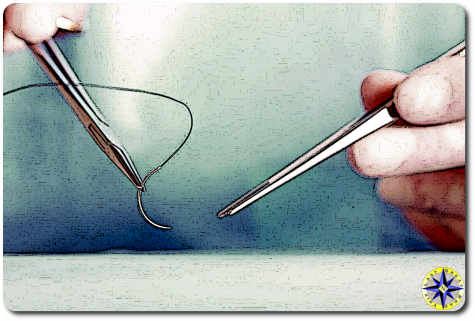 With all the work and mods being done in preparation for the Arctic adventure, it was only a matter of time before one of us drew first blood. The first round goes to the rig with me ending up with some very manly stitches.

It began innocently enough. I was removing some of the plastic guard from under the wheel-well since it is no longer needed now that the stock bumper is gone. A simple little mod, just cut the plastic snaps connecting two pieces, fold back and zip tie it all up and out of the way. How tough can it be?

First, slide the box cutter between the two pieces, up against the snap. Next give the box cutter a quick pull across the snap cutting it in half, making sure not to apply to much force causing the knife to cut you… After I looked down at the 1/2 inch deep gash in my forearm it was easy to see that this was going to leave a scare.

Hustle inside, slide the forearm under cold running water to remove all that dirt out of there and hope the stinging and bleeding will stop. Turns out I should have been a surgeon. The cut was clean and straight. Missed the artery, but exposed it nicely so you could see the blood pumping though it and the layers of skin and fat that once surrounded the vessel. Realizing this might require two hands to bandage up and since the wife and kids are out, I started going door to door.

The great thing about where I live is that within two blocks you can find a physician of every specialty. In fact we can probably start our own HMO. Of course like a cop, there is never one around when you need one. I ended up at my neighbor the dentist, so he could put me back together in his kitchen.

In the end, I got a few manly stitches, went back and finished the little mod. The plastic is nice and tight protecting the paint from flying gravel and I have my first scar to remember this adventure to the Arctic Circle.

By the way: Turns out you really can get lock jaw from a rusty box cutter… so I’ll be getting a Tetanus shot soon.