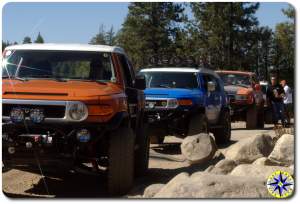 100 yards into this off-road adventure and we’re breaking out the hi-lifts…  Welcome to the Rubicon Trail! We’d heard tales, read about it on-line and seen pictures… But until you are facing down the Rubicon Trail’s boulders, it is hard to understand the knot that wells up in your stomach as you realize… this is wheeling… on the big stuff.

Until now most of the off-road trails we’d run have their obligatory little rock garden you can play on or easily by-pass.  The Rubicon Trial is one giant rock garden…  and that is the by pass.  Gate Keeper is just that, originally designed to stop tourists and all but the most heavily built rock crawlers.  These days, after a little dynamite a while back, its a bit more friendly allowing us to pass in our puny 33″ tires and 3+ inch lift long travel.

We drove 798 miles down from Seattle just to wheel 6 miles of rock and dirt the entire first day.  The Rubicon is a giant granite mountain basin, and when I say off-road trail, think some dirt holding boulders in place and a cliff edge thrown in every once in awhile to pit your survival instincts against your desire to keep the body panels off the high side ledges.  Never the same, each year the snow and ice of the Eldorados erodes the soft dirt away exposing more of the granite chunks and changing the trail so it is never the same.  But the the Rubicon Trail’s history is rich and stead fast with names like Gate Keeper, Little Sluice, Walker Rock, The Slab…  marking our progress on day one.

The sound that metal and granite make when they occupy the same space in time can be a bit disheartening…  On the one hand there is the KATHUNK as the rig crashes down on the granite bashing skid plates and frame against the boulder below or your diff stopping your forward progress as it fails to clear the rock…   The other sound is the scream of metal as sliders rip along the boulders leaving paint and steel behind.  Like flesh being scraped from your chin as you slide across the gravelly tarmac face first leaving the faint hint of blood behind the sliders mark your forward progress.  All day long these sounds echoed down the canyons and announced our presence on the trail. 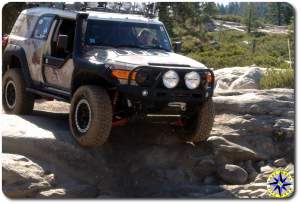 Running second in the group was both a blessing and a curse…  Following Mark, our trail leader, gave me clear visibility of the lines he skillfully choose as he picked his way through the fields of boulders… However within moments Mark would be around the corner and onto the next line while I was left to focus on where in the mine field I was and how I was going to move on without loosing an appendage.  Mark made it look easy…  I was just glad to make it.

At the trail head the 80 series, our support rig, was a little low on diff fluid so it was topped off.  On the trail the 80 series dropped its differential drain plug spewing out every drop of its 90 weight.  Following the blood trail back to the diff plug and sopping up the mess took a little time.  Add to that the plug taken a beating on the rocks before coming loose and we were into this repair an hour or so before finally adding more diff fluid and buttoning it all up.

Picking through boulders which opened up onto vast granite slabs and shelves followed by narrow walled passes defined the day.  And what a long day…  Loon Lake to Buck Island Lake is only six miles, yet it wasn’t until sunset that we pulled onto the granite slab we would call home for the night.  Exhilarated and exhausted we pried our hands from the steering wheel and unpacked our gear to set up camp by the light of our headlamps.

Around the camp lantern we ate and chatted…  We didn’t talk much about the day’s ordeal, instead sharing what brought each of us to this place in life and comparing mountain biking scars.  At 6,700 feet the night falls hard and by 10:00 p.m. we were retiring to our tents to recover from the long day and hide in our sleeping bags from the cold.

As I stared up at the stars from by bag, I was reminded of just how small we are in the universe and how lucky I was to be on this Rubicon Trail off-road adventure.  Few people are given the opportunity to chase their dreams and fewer still do…  Oh My Hell…  I’m on the Rubicon Trail and loving it.

Want more pictures from day 1…  You’ll find more on 2009 Rubicon Trail off-road adventure day 1 photos on Flickr…  There are a lot of good photos that couldn’t all fit here.

6 thoughts on “Oh My Hell… This Is Rubicon!”