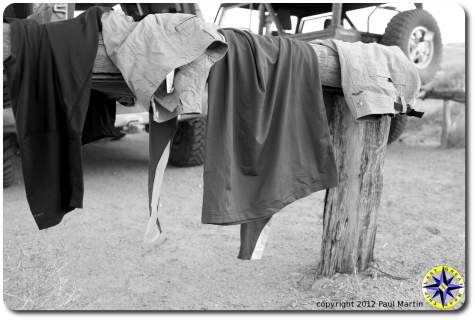 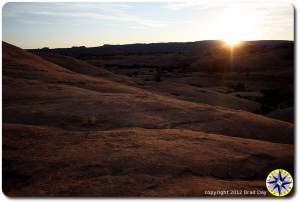 Moab in July can be summed up as… Hot! It’s dead calm, barely morning (by our standards) and we’re considering where in town to grab breakfast.  As long there is air conditioning, we’re not all that concerned about the food.

Around the table of some little hippie cafe we’ve spread out maps, trail guides and coffee as we debate which of the 30 some 4×4 trails we’ll run…  Fins and Things, Elephant Hill, Poison Spider, Lockheart Basin… We’re looking for a challenge without being gone all day and we’d like to avoid carnage if we can. 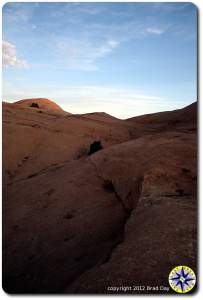 We discussed the various 4×4 trails over breakfast tacos that were chased down with shots of espresso and lots of water. The Utah Backcountry Discovery Route has amazing views and covers all sorts of country, but today we want to test our driving skills with some serious off-roading and settled in on Strike Ravine.  Strike Ravine, rated a 4 out of 5 by Trail Damage is known for steep hills, loose rock and big boulders more reminiscent of the Sierra’s than than Moab and its famous slick rock. This seemed to be exactly what we were looking for.

13 miles south of town, we were pulling off the highway and readied the rigs for a day of 4-wheeling.  Airing down to the teens and checking that everything was lashed down, we took a few more swallows of water and headed down the two track. 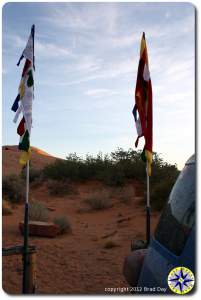 Around a bend, past a rocky area and we came to the Big Ugly.  Big Ugly is a major obstacle, a long rocky hill climb filled with loose shifting rock and nasty boulders in all the wrong places. Barely 10:30 a.m., sunny, 90 degrees out and we’re about to start wheeling.

I may seem carefree about wheeling when we go on these odyessys but there is a method to my madness.  I try to put together a solid, well balanced team to hopefully cover any scenario.  A lot of careful thought goes into what each member brings to the table.

As much as I kid Brad, he has navigation skills.  Not a lot of wheeling under his belt but when it comes to managing the route and keeping us on schedule, few will match up. Just as important is his positive attitude and willingness to do what ever is needed. Setting up and tearing down camp, humping gear around or helping with repairs Brad pitches in with a smile. But most of all, I know I can count on Brad… He is one of the few guys I trust with my life. And as a bonus he has an eye for a great photo too. 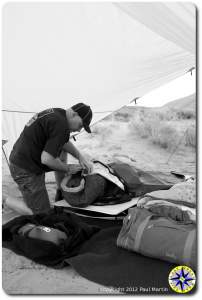 The Other Paul, as I affectionately refer to him, is one of the best 4-wheeling guys I know.  He has wheeled around the northwest, the Sierra’s, Moab and other parts unknown.  The Other Paul’s experience includes time behind the wheel of an FJ Cruiser, his old 60, and his latest rig, the legendary Land Rover, Defender 90.  To keep honing his skills, Other Paul regularly goes out with Bill Burke, adding to his bank of knowledge. There is no one I trust more when it comes to making sound off-roading decisions or spotting me through a tough obstacle.

And when these two guys get going…  It is hard not laugh as their tall tales, 80’s movie quotes and bad jokes pour out.  They may not may not be pretty and no they can’t put up a three-pointer from half-court but this is my off-road adventure dream team. 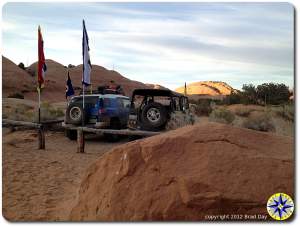 The Other Paul took lead, gracefully maneuvering his D90 up the first half of Big Ugly. Hopping out of his rig, he provided some general spotting guidance on the best line up the first half of the long climb.  Finding a flat spot, I pulled up to let Brad, who’d been filming, hike up the 200 yards of loose rock and gravel, we’d just driven as I sat watching the D90 motor up the last half of the long steep obstacle.

100 feet from the top was a large boulder right center, cliff on the left and another boulder further up, on the left.  The line is hang left 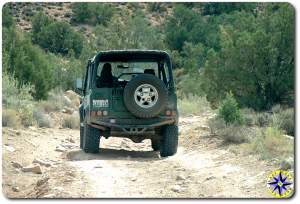 (no too left, remember the cliff), pass the first boulder then come back right while keeping forward momentum among the loose rocks. That is the line…  That was not my progress.

Not keeping far enough left and coming around right too soon put my rear passenger tire into the boulder, stopping forward progress.  Other Paul was quickly on it, evaluating the situation and ready to spot us out of trouble.  The idea, come forward than use the sliders to rotate around boulder and we’re back on our way… its a good plan but not a lot of room for error.  That is the plan…  That was not my progress. 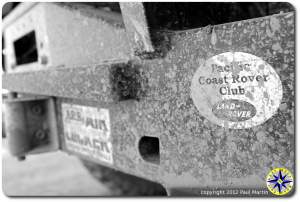 Poor clutch management had  us slipping down hill and now the Blue Bunny is pinned against the boulder. When we say pinned, think slider holding the lower half of the boulder at bay while the top half of the crooked boulder is kissing the passenger door. Not yet denting the door, but like lipstick on a collar, there is a little blue on the boulder where it shouldn’t be. We Are Stuck. 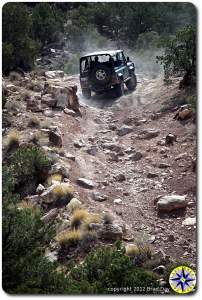 If you’ve not been stuck before…  here is the drill.  Driver stays put, maintains control of the rig while the spotter works out the options.  Brad is pinned in by the boulder so he and I lament our position in the world, careful not to shift the weight of rig, while Other Paul develops the plan.

I followed instructions to turn the wheels passenger, turn them driver, bring them straight. Other Paul studied the truck’s lifting and lowering as the wheels turned, keeping a careful eye on the point at which the boulder touched the rig.  He calculated the position of the boulder, the force of gravity and my desire to get out of this without putting the body shop owner’s kids through college.

The plan is to use the hi-lift to winch the boulder away from the rig enough to drive off and get away with all our parts intact. It was either that or power through it and replace a couple of doors and quarter panel…  We opted for hi-lift approach rather than the bull in a china shop idea. 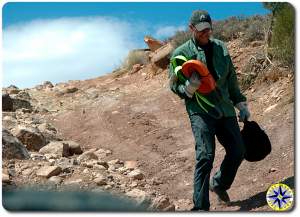 Brad and I sat tight as Other Paul bounded up and down the 40 some yards to his truck several times.  The pile of recovery gear next to us grew with each return trip: strap, hi-lift, shackles, extensions…  He put a strap around the rock, anchored a line to a leaf barren tree perpendicular to the rig up the hill.  Plenty of winch extension but without any chain, Other Paul would have to remove all the slack with several bytes on the rope before the hi-lift could begin to pull the boulder away. Dragging gear here and there, setting up for the pull, Other Paul was getting ready.

We interrupt this story for an important PSN: Heat exhaustion is a illness that may occur after you’ve been exposed to high temperatures. The most common signs of heat exhaustion include: 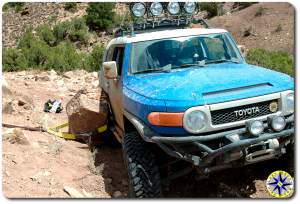 Although heat exhaustion isn’t as serious as heat stroke, it isn’t something to be taken lightly. Without proper intervention, heat exhaustion can quickly progress to heat stroke, which can damage the brain and other vital organs, and even cause death.  And now back to our previously scheduled story… 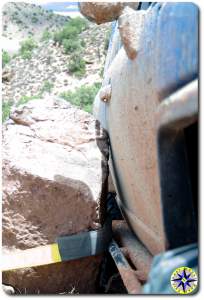 At 5,000 feet in 100 degree heat, Other Paul appears to be showing the on-set of heat exhaustion.  And in what seemed like a blink of an eye, his health started to slide.  This is no longer about getting the rig unstuck.  Kill the engine, set the brake, secure the rig in gear and we’re outside to check on Other Paul.  Pale and unsteady he is making his way to the only shade for miles, beneath a scraggly juniper bush. Getting a water bottle to Other Paul and soaking a t-shirt that he can rest on the back of his neck to get his body temperature down, we make sure he is safe and comfortable. Weak but coherent, Brad and I take turns sitting with him, making sure hydration continues and to ensure he doesn’t slip into heat stroke.

An hour and several quarts of water later, Other Paul is feeling stronger.  As he recovers we discussed options to get the blue bunny unstuck and while Other Paul rests, we rigged up the plan.  Don’t fool yourself, it’s easy to misjudge the effects the heat has on you…  we’d talked through everything I’d do in the rig and the line I’d follow as the boulder was winched out of the way…  Hot and tired, I forgot about half of what I was going to do as the boulder fell clear from the rig. 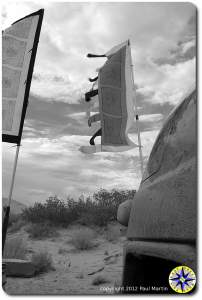 I forgot to release the e-brake and knocked into a couple other rocks as I lugged forward, somehow managing to climb to the top of Big Ugly with nothing but a small scratch where the boulder had kissed the rig.

We’d spent three hours on the trail and barely managed to cover 400 yards. It was time to get out of the heat and take care of ourselves before something went seriously wrong.

Back in town we made a bee-line to the Moab Brewery, an air conditioned oasis where we grabbed a bite to eat, considered our good fortune and hydrated with lots and lots of H2O. We sat in our little corner booth for hours, teasing our waitress, who clearly had a great sense of humor, and stared out the window as a storm violently blew.  Eventually, feeling we’d properly hydrated, having made several trips to see a man about a horse, we packed up, tipped our waitress generously and made our way back to camp. 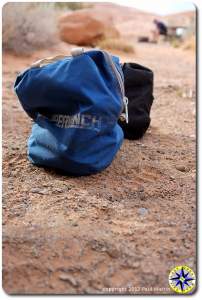 The storm that was blowing tourist off the sidewalks in town is violently attacking Kamp Karma.  Prayer flags blown into the trees, Other Paul’s tent lying kittywampus on its side, our Noah tarp flapping wildly, held up by a single pole and sand covering everything. This is not the worst problem of the day but definitely not how we wanted to spend the next hour.  We worked at securing camp by doubling up on the guy-lines as well as piling rocks onto of the stakes and anything that wasn’t nailed down.  The noise of tightly stretched ripstop nylon getting beaten by the wind echoed off the slick rock and filled Kamp Karma. 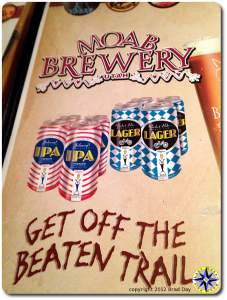 Still hot and now being sandblasted as we sat around camp, we recalled that the Moab Brewery menu spoke of root beer floats… and air conditioning.  Frosty mug…  foamy top… and creamy root beer goodness makes the worst day a little better.  Considering we hung out for several hours, well past dark, we should probably have paid rent on that booth.  When we finally left the brew pub for good, the wind hadn’t settled down much, dry lighting flashed in the distance and a thick cloud cover obscured the stars.  Laying in my bag, listening to the tarp abuse itself in the wind, I thought about how quickly life changes…  in a matter of hours we’d seen highs, lows and everything in between.  But despite it all, the dream team got through it and was hunkered down safely for another night, ready to face whatever the next morning will bring.