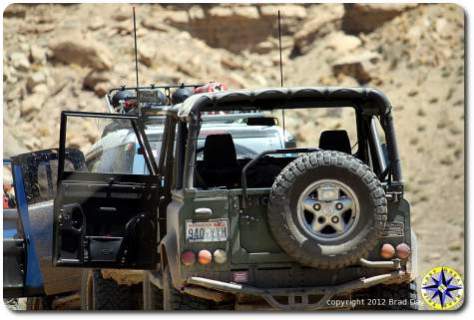 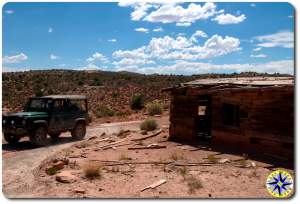 I finally broke my slumber, rolled out from the hug of a soft bed and wondered down for the free motel breakfast…  You know the one, rubbery scrambled eggs, greasy bacon, biscuits and grey gravy the consistency of runny jello with a thin yellow 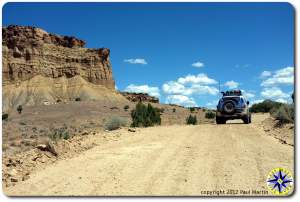 film gleaming under the glow of heat lamps, tubes of sugar disguised as breakfast cereal and the crowd pleasing make your own waffle station.  The guys had been down there for hours discussing my pied piper tendencies and their inexplicable desire to accompany me 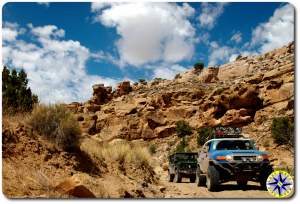 along this journey, regardless of how ridiculous it might get at times.

Well into the central Utah section of the back country discovery route, the threat of rain is gone and sun is smiling down on us.  Ninety degrees in the shade, if there was any shade and we were still  two hours away from reaching noon. 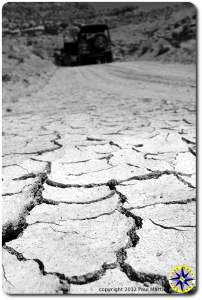 Leaving behind a short stretch of highway, the route returns to dirt entering the canyons where breeze is forbidden as we enter the oven.

Even in the 100 degree heat, life abounds. Lizards, snakes and turning the corner a pair of big horn sheep dance from ledge to ledge on the canyon walls. This land is hard to describe. The landscape feels foreign and familiar at the same time. Hostile and welcoming but mostly unbelievably hot.  I have a desire to just sit and stare in an attempt to make sense of the canyon’s confusing power… 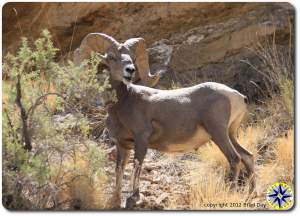 But Moab remains a long ways away calling our name.

The route that once twisted and turned through the canyons has now stretched out straight as far as the eye can see.  Yes our FJC has air conditioning, but standing in solidarity with the Other Paul in his D90, we left the windows down and embraced the hot breeze that streamed in as we moved down the trail.  Dust devils dance across the land and the smell of sage filled the cabin as we drive the route. 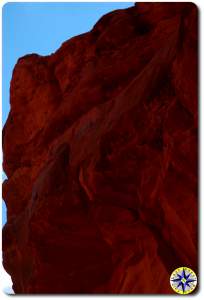 The Utah Backcountry Discovery Route takes you to places you will be hard pressed to find on your own.  The route brought us through the flat sage, over several sets of hills and into another amazing canyon. The scene turned from brown to a Christmas red.  Floor to ceiling the dirt and walls were a new shade of fire engine red. Not the dull brick red that I knew from Oklahoma, but a crimson that puts a Dexter blood spatter scene to shame.  We motored along slowly soaking in the brilliant color. A small creek that meandered through the length of this red paradise seemed to lower the temperature with water showering the side of the rig as it crossed our path every 1,000 yards. 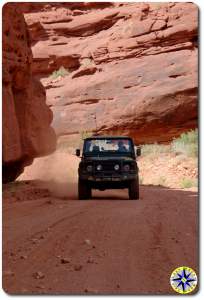 We made camp in the heart of Moab.  Soft sand surrounded by large slick rocks defined the camp ground with only a single, roofless outhouse that made no distinction between men and women.  We set up camp knowing this would be home for two nights. With time and the early evening sun on our side, we pulled out all the stops to display our colors as we established Kamp Karma.  The word “slickrock” was derived from early settlers whose metal-shod horses found the expanses of barren rock slick to cross. Off roaders, mountain bikers, and hikers find just the opposite since when dry, 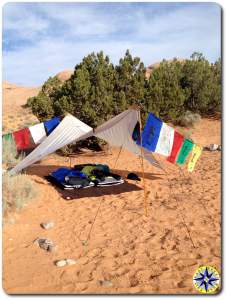 the naked sandstone is as coarse sandpaper and easily climbed.

The day’s heat had taken its toll on the team.  After cleaning up our dinner mess, the guys decided to leave me and an armada of  dive bombing bugs circling the lantern, for the comfort of their bed rolls.  While the guys snoozed in their racks, I worked deep into the night: editing photos, recording notes on the day and posting a few highlights on Facebook to let everyone know we were still alive, despite a close encounter with a very large black scorpion only minutes earlier. 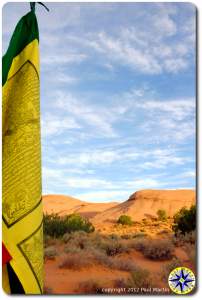 Work complete, still wide awake and looking to put some distance between the scorpion, I hiked up one of the slick rocks behind camp to take in the night stars.  Stretched out on my back, the taste of midnight and a fine cigar still on my lips, the texture of her voice the loudest sound in my head and a million points of starlight pricking my skin.  I laid there contemplating my place in a universe spread out before me in the dark. Life is a series of small moments that we cannot hold onto but this night, like so many before, will be carried forever in my heart. 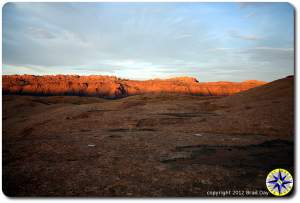 Walking back down to camp in the dark I felt the rush of knowing tomorrow we’ll get a chance to test steel and skill.  Tomorrow we wheel Moab.