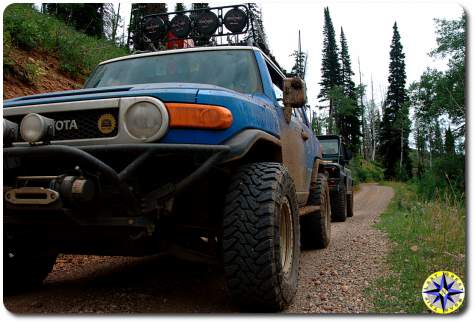 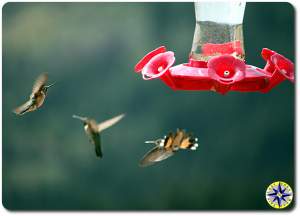 You would think with two different maps and the GPS waypoints we could find the trail. It’s obvious once you know… but it wasn’t until the third drive by that we made the correct turn to start the Utah Backcountry Discovery Route.  So lets talk maps…

If you are going to drive the Utah Backcountry Discovery Route please purchase the map and show your support! The map sales help to keep these BDR projects going as a sponsored, community driven effort. When you receive the map, look at it…  smell it… frame it and then leave it at home.  This is not a good map.  An entire side of the map is dedicated to the state while the route takes up a small 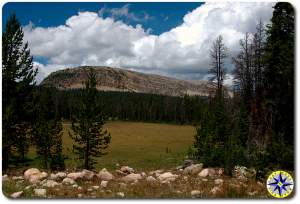 portion along the eastern edge of the state. The detailed sections are not that detailed and you can not fold the map into any configuration that will align the state view and the detailed sections together.  The road numbers don’t jive with the DeLorme Gazetteer or the forest road signs along the trail. It appears their scheme for assigning forest road number is based on the lottery’s quick picks. Don’t count on the map for route finding.  Absolutely download the GPS waypoints.  The waypoints are dead on, extremely detailed and free. Before you start the Utah Backcountry Discovery Route, grab a Gazetteer, overlay the route with a yellow highlighter and load up the waypoints into a GPS. Now you have the tools you need to find your way.  Still, buy the map…  it is pretty and it comes with nine pounds of dual sport gear catalogs that you’re bound to find a use for…  even if it is only as a wheel chuck. 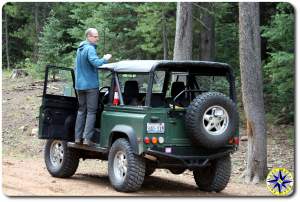 Blue sky, fluffy white clouds, 70 degrees.  You would be hard pressed to have a better start for any off-road adventure. The northern most leg is wide, easy, graded and graveled forest road allowing us to casually shed the tensions of the 900 miles of asphalt that brought us this point. Heading south on FR056, we passed lines of pickups hauling trailers back from a weekend of family outdoors. As the miles passed, the road thinned down as did the parade of rigs and quads. Soon the luxury of gravel gave way to rock, hardpan and potholes filled with the water from yesterday’s thun 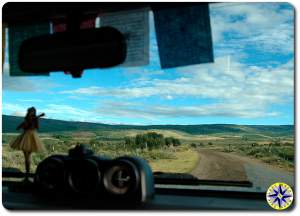 derstorms but we had the forest road to ourselves.

Utah, like most states in the west, is large. The terrain depends on where you are within the state. In the north, picture mountains, evergreens, stands of aspens and open sage brush. Back home in the northwest we have tight twisty trails through dense forest. Here we’re treated to open views above tree line. When we drop into the forest, it is open mixed with meadows, the smell of sage and pine filling the rig. This is an adventure for all our senses. 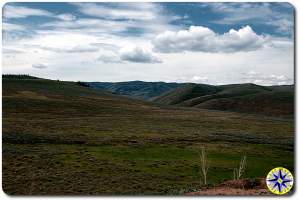 We motored through this leg effortlessly, spotting humming birds, eagles, prong horned antelope butterflies and a pallet of wild flowers.  We also saw countless free range cattle and sheep.  We were driving between eight and nine thousand feet above sea-level. At this elevation the temperature remained cool even in July.   And while the puddled trail and darkening sky threatened to dampen the day, the rains remained across the valley while we enjoyed the drive. 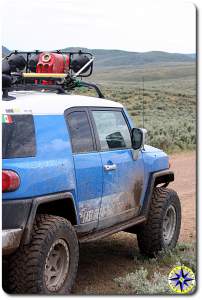 The Utah Backcountry Discovery Route is intended to be driven south to north so this leg is expected to be an short, easy last leg.  For us starting out…  a little too short. Before we knew it we were done. As we fueled up in Evanston, two things became apparent. The Other Paul had left his gas cap back at Bear Lake and we still had lots of day light in front of us.  A quick trip through the isles of Walmart solved the first issue.  Guys are goal oriented. Attain one goal and then they’re off on the next one. We’re no different. Continuing down the second leg we took advantage of all that extra day light. 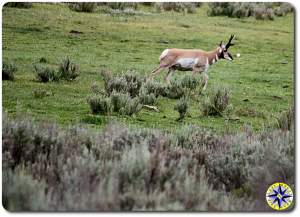 These adventures are about finding the unusual… the different…  the little things you wont see driving 75 mph on the tarmac.  Coming around a corner stood a small stone marker.  Nothing special and I’m sure we’d of blown by if not for a long forgotten memory that fired off in the recesses of my brain.  When I was 14, I went on a road trip with Dad across the country.  Somewhere around midnight on that trip we stopped at Four Corners to see the spot where Utah, Colorado, Arizona and New Mexico come together.  On that night under the stars I stood in four states at once. (sorry I’m back)  While this marker only defined the edge of Utah and Wyoming, I found myself hopping between states like a giddy school girl who’s name was just called out for prom queen…  “I’m in Utah…  I’m in Wyoming…  I’m in Utah… I’m in…”.  No way for a grown man to act, but this is Ferris Bueller’s day off. 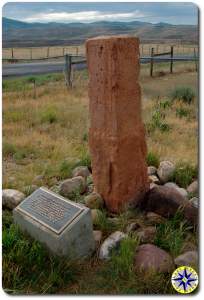 Up to now the route took us through  state forests and BLM land.  The trail now started to carve through private ranch land. The public may have easement, but that doesn’t mean the ranchers have to like it.  Crossing the cattle gate you are visually accosted by signs that scream “Stay on the road.  Do Not get off the road.  Do Not hunt, fish, hike or camp.  Do Not do anything but drive through and stay on the public easement.”  And those nice gravel roads…  this is a road in name only.  One lane, unmaintained, rocky, muddy and traversed by more cattle than cars.  The reward of this track through the ranch land…  Unbelievable vista’s and complete solitude. This is a big…  big ranch. The route went on for miles, carving through the mountains, exposing view of valleys and the mountains beyond.  Angus beef on the hoof often stood in our way, 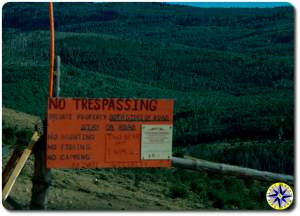 challenging us in a game of chicken as we inched forward encouraging them to give passage.

The sun was beginning its long decent as we finally reached the other end of the ranch, several hours later.  Marked by another cattle gate and stream we were now free to look for a place to call home for the night. We hadn’t seen a soul since Evanston until when we came across a sheep herder rounding up his lost flock just beyond the ranch’s boundary.  This is working BLM land with men who live with their livestock.  Modern times has them 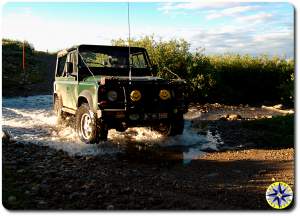 in trailers instead of old canvas bedrolls but they still work their herds on the back of horses and their tanned leather skin has the story of the west written in their sun dried wrinkles.  Gruff at first but when we swung back to let him know we’d spotted some sheep up ahead, the old guy immediately warmed up and was eager to chat.

I enjoy dry camping and that is exactly what we found…  a spot under the trees 100 yards off the trail. Dry camping means you have to bring everything you need (and hall it back out). No water, no outhouse, no manicured walk ways.  For this minimalistic flat spot under the trees you avoid the RVs with their generators, satellite dishes and families trying to stay connected to the coconut telegraph. 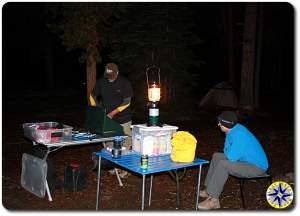 The lantern and headlamps illuminated camp as we fixed dinner and talked over the day.    The middle of July and we’re bundling up in layers and beanies as we crawl into our sleeping bags exhilarated and exhausted from 100 plus miles of dirt roads through an amazing section of the county.