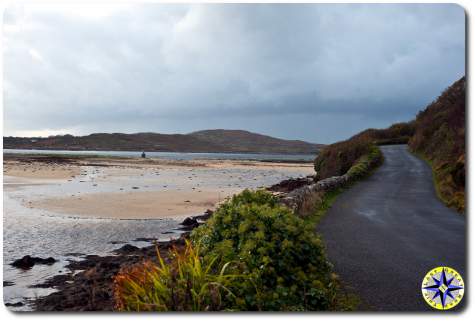 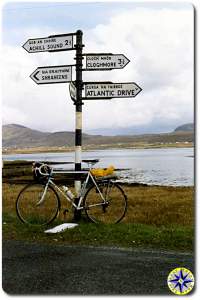 There is one thing that can be said about traveling across Ireland. It is that everyone should do it at least once. Even for the faint of heart traveler, this road trip can be accomplished in so many ways; there is no excuse not to. For me, part of the adventure is driving myself. There is something particularly fulfilling about having driven 600 miles on the “wrong side of the road” in the passenger seat. To me the only thing wrong with Ireland is that it’s not just off the coast of the U.S. and I can’t go there several times a year. That aside is it perfect, if you like lush, green, ocean views, friendly enough people, good food, historic sites, easy access to comfortable places to stay for any price range, and natural beauty. I digress into sounding like a travel agent but, it’s hard not to. Ireland is just that easy, or hard if you choose.

On this trip we drove. Our vehicle was one step up from the two door spec. This, to me was the especially thrilling part of the trip. Especially when reeling 60 KM per hour around a blind hairpin curve on a tight two lane road that might be 15 feet wide with a semi, tour bus or enormous farm tractor coming at you from the other way. Did I mention that there is no shy space or shoulder on either side of the road?

Close your eyes and picture this. You’re in the smallest vehicle imaginable north of a motorcycle, sitting on the wrong side of the front seat, driving on what physically feels like the wrong side of the road and in “your” lane, the lane you are naturally inclined to desire to drive on from behind a blind curve in comes an giant vehicle that consumes 2/3 of the road. Just inches from the passenger seat is a stone wall 4 feet high. Springing out from that wall are the fingers of age old vines and new spring growth that threaten to streak along the quarter and side panels of your car but not soften the blow if you sideswipe the wall. The suggested speed is far faster than common sense dictates and you’re going that fast. So is the oncoming vehicle that visually feels as if it is coming at you head on. It appears. You suck in an instant tense breath and shut your eyes for a split second, and grip the wheel a little tighter to stay your course, assuming that this time it is really going to hurt. By the time you release said breath, you’ve passed the aggressing vehicle unscathed and are rounding the next curve. Now repeat this over and over and over for 100 miles a day. It is no wonder the crotch of skin between my thumb and index finger was chaffed. Even for the most seasoned driver, it can be a gripping (pun intended) experience. 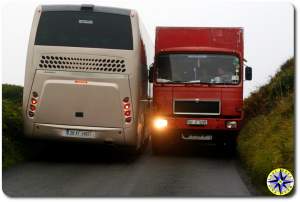 For the faint of heart there are several other ways to make the trek. Most noticeably in some parts of the country was travel by tour bus, privately hired buss, or van. Frankly, I don’t advise any mode of travel that doesn’t allow for a change of plans on a whim. There are too many opportunities to turn left when you’d originally planned to go right and see something you hadn’t anticipated. On this trip to Ireland, that was the plan. Just go. We’d decide in the morning what we were doing that day with an end point in mind and in ten days followed our plan to the letter never. We might chat with someone at breakfast or lunch and learn of a must do detour and do it, or see a road sign that lured us in and veer off course again. There isn’t a wrong way on this island. The only limitations when driving are water; you have to stop or go around it, too many opportunities to take a different path, and the date one must arrive at the airport to return home. There just isn’t enough time to take every opportunity, meaning, it will be a requirement to return. 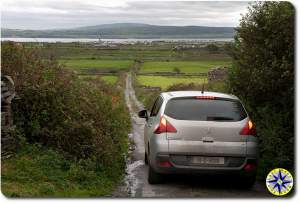 For someone who likes to take the road less traveled a little slower there are always the bike and foot trails. Cyclists and hikers were prevalent, particularly in the south west region running north and south of Kilarney. The coast reaching all of the way north to Galway is in some places alluring and in others, breathtaking. I am an experienced road cyclist. Those I ride with are even more experienced. We agreed that biking (meaning bicycling) on these narrow curvy roads through the steep climbs of the Rhododendron forest on Highway Vee, around the curving stretches of the Dingle peninsula, Ring of Kerry, or along the cliffs of Mohr would be a thrill of its own kind. One borne of trust, as one would have to trust all other modes to not only be on the lookout but, many times to determine that you are more important that the paint job on the side panels of their car or the rims which hold their wheels. 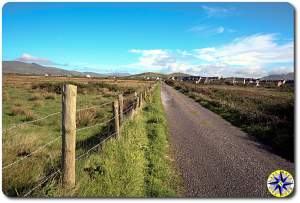 Hiking is also an option. We saw many walking these fine roads. The trick would be to have your dive style perfected before you go. When coming upon packers and even those strolling along the roadway near their homes, my first thought was always, I wonder how many times they’ve had to dive over a hedgerow wall to avoid getting smeared right into it? Apparently for hikers and bikers, not many as we often ran into the familiar forms we’d passed earlier in the day once we settled in a town and began exploring on foot.

For me mode of travel is as important as the trip itself. I am never happier than when I am behind the wheel, handlebars, leaver, or trail map determining my own destiny. In Ireland, there is not wrong way. Even if Seri disagrees.