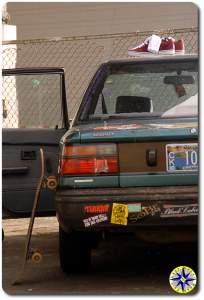 The great thing about road trips is they never really begin or end. And though on the last great road trip team I am the son, in life I play a father for two great kids. Today I drove down to Portland, Or. with my boy. We made the trip to see our friends at Metal Tech who are doing several mods on the Toyota FJ Cruiser. I will tell everyone about that tomorrow. But coming into town a day early gave Boy and I time to kill and for Boy there is no better way to deal with time than by tearing up a skate park.

Those who know skateboarding have heard of the Burnside Skate Park. Famous around the world for the skaters who fought the man and the skaters won. In 1990 skaters cleared away the bottles, cans and trash to put up a few transitions right on the concrete pillars of the Burnside Bridge. Over time skaters added in more transition and bowls until in 1992, the city recognized 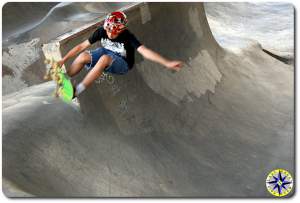 that under the Burnside Bridge was a city skate park. One of the most unlikely places for a park, it sits beneath the bridge in the industrial area just east of down town with trucks and forklifts moving all about. The skate park looks as sketchy and underground as its surroundings. This is exactly its appeal and since it was built by skateboarders, it reflects what skateboarders like to skate not some municipal engineers idea of skating.

Boy loves to skate Burnside whenever we drop into Portland. The thing we have discovered about the Burnside skate park is that you never know… and you don’t. What does that mean? 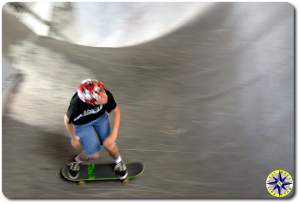 It means sometimes you will run into friends that moved out of the state and made a pilgrimage back just to skate Burnside. Sometimes it will be pouring down rain… this is Portland remember… and Burnside skate park is the only dry park filled with every skateboarder in town. Other times you have the whole park to yourself, the only sound is the constant drown of tires hitting the expansion gaps in the bridge above and you thrash around the transitions. 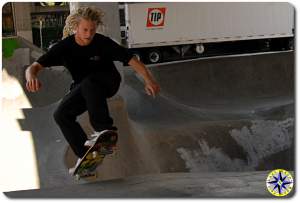 This time, with the rain threatening, Boy made a few warm up runs in an empty park. After a ten minutes of soulful skating and solitude, a van pulled up. This weren’t no ordinary van, it pulled into the lot like… like a prom queen yelling look at me in the middle of the home coming parade. The van was wrapped with graphics front to rear displaying earth, wind and fire, the three elements of life. When the van stopped next to the park’s quasi entrance, out poured a bunch of pro-skateboarders from team Element, including Chad Muska, Levi Brown and Tosh Townend. These were real skateboard pros. The type of pros who skate each day on a dozen new boards, have their pictures in magazines and posters. They have their own camera crew filming them for the next “Lords of Dog Town”, and they make personal appearances at shopping malls and skate-centers hawking decks, trucks, wheels, shoes, shirts, energy drinks and anything else marketing experts feel they can get young teenage boys to buy. 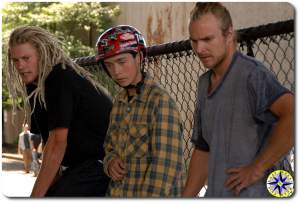 But today the pros of Team Element were at Burnside just to skate. Just to spend time at Burnside as regular guys who love skating with their friends. And today, Boy was one of their friends who they would hang and skate with. 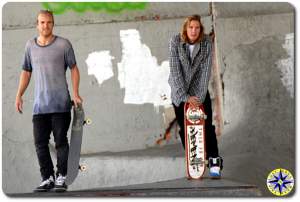 Watching Boy skate is always exciting as he throws himself into it with everything he has. Today was no exception and having
several of his heroes applauding and encouraging him made it that much better when he stuck the landing.

And if you’re ever in Portland, Or. on the east side under the Burnside bridge look for some of the new feature the skateboarder are adding. A continual work in progress, skateboarders are always looking for new challenges in 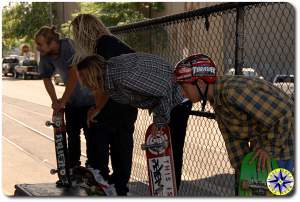 their sport. Whether it is jumping the great wall of China or traveling city to city in the team van, at the end of the day these guys still remember it is fun to skate and hang out with you friends.

Bonus feature: Here is the Element skate session video  (unfortunately Element took it down). Look for cameo appearances by Boy and the rig.