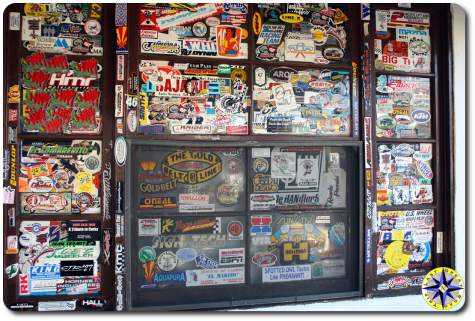 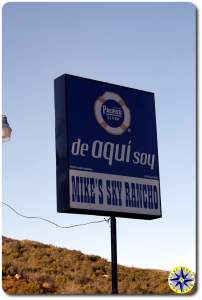 For years off-road motorcycle guys have been going into the Baja and riding the desert winds. Mike’s Sky Ranch has been a main stop, providing beds, beer and camaraderie for desert explorers and racers since 1967. 14 miles from the nearest paved road the ranch’s location delivers a sense of seclusion and adventure for those willing to embark down the dirt road.

We planned to use Mike’s Sky Ranch as our jumping off point. In the dark, the dusty unimproved drive up into the mountains where the ranch is nestled, took a little over an hour. After driving past cattle, cactus, sage brush and boulders under a jet black sky with countless twinkling stars, something magical happened as we crested the last hill. Like Disney Land, the lights from ranch drew us in with the same hypnotic power the magical kingdom holds over a nine year old. 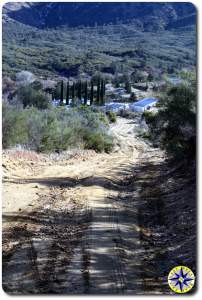 We didn’t have reservations. We hadn’t called ahead. We weren’t even sure where to go as we approached the subtle blue glow hovering 50 feet above the compound. This was Mike’s Sky Ranch the ultimate laid back desert oasis. Walking up to the compound entrance we passed a trophy truck, a couple of unlimited open-wheel two-seaters, and a group of riders working on a quad by the light that was spilling out from the ranches entrance.

The grass really is greener on the other side. Crossing the threshold of the compound we stepped in from dusty, dry, sun-baked dirt on to lush green lawn, well lit covered parking for dozens of motorcycles, shimmering pool and red clay tiles leading us to the bar.

Walking into the bar immediately took me back to my youth hanging out at the fraternity and it’s basement bar.  Low dull lights illuminated signed race t-shirts stapled to the ceiling, baja race posters, beer signs and pinup girl calendars taped to the wall.  Video of past races played on the TV above the bar.  Scattered about the otherwise empty linoleum tile floor, several groups of riders had arranged old short black vinyl swivel chairs in small circles. The riders toasted the day, talked of their adventures and laughed hard between tequila shooters. 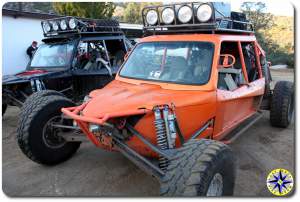 Behind the bar stood a young brown skinned man reaching back and forth along the mirrored wall of liquor and flipping Tecate, Pacifico and Dos Equis beer taps open and closed. After the bar tender dispensed another round for the riders, he turned his attention to us. Over the Mexican  music streaming from the boom box we asked if there were any rooms available. The bartender gazed over to the end of the bar and pointed to a very large, old man sitting on a stool at the end of the bar and said talk to Mike. An ash tray full of smashed out cigarettes, a pack of smokes and matchbook rested on the bar to his right. A half full glass of bourbon on his left. The haze of cigarette smoke circled above his head where a ball cap sat hiding his leathery face and half closed eyes.  A spiral notebook rested on the shelf an arm’s length from his stool. 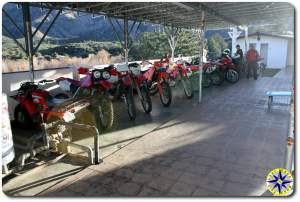 The big man reached for the notebook.  Flipping through the pages he looked up at us asked how many we were and how long we’d be staying. We let him know it was just the two of us for the night. In a gruff, horse voice the big man said he had a room. It would be $60 USD a night EACH but it included dinner, breakfast and hot showers. We handed over the cash and were told a room number.  The room was on the back side of the compound up a set of concrete stairs who’s rise and run made it awkward to climb with gear under each arm and bags slung over our shoulders. 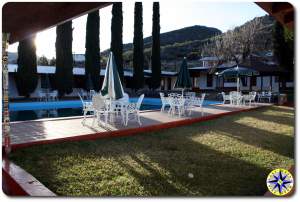 There were no keys to the room and the windows were covered in race stickers proclaiming those who had come before us and the rich racing history of the ranch. Inside the room were three neatly made twin beds, a wall mounted propane heater, a set of clean towels in the bathroom and a single 60 watt light bulb hanging from rafters. The walls were adorned with coat hooks for hanging motorcycle leathers, coats, gear and helmets.

Wandering back down to the bar we grabbed a drink and arranged a couple of the old chairs in the corner where we could unwind and relax before dinner.  If we were going to find the truth about the conditions in Mexico and what to expect on the trail, this was it.  One of the guys who had been coming down here for 20 years was full of advice and cheep Mexican beer.  He confirmed the military were here to help and that the local police could be a hassle but if we kept our nose clean we’d be fine.  He also expressed what we found out first hand.  The locals in Baja are warm and friendly.  While he hadn’t been as far south as we were heading he was confident we would have a good time and not run into any trouble. 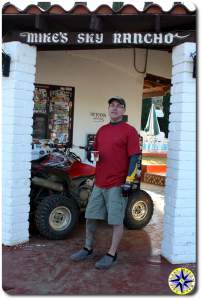 We eavesdropped on the stories of the other groups. We talked about the day, how we were feeling so far and what we were going to be taking on. We celebrated how we had managed to get through Tijuana, the immigration office, navigated the highways and that we were really at Mike’s starting our adventure. We questioned our good fortune to be here and reveled in our euphoric but so misguided belief that we understood what was in store for us. We foolishly believed going forward would simply be a long series of navigational challenges on some dusty dirt roads with one or two stretches that could slow us down for a bit. We were convinced 200 miles a day would be a comfortable pace and would easily take us into Cabo five days from now. We ordered another round as they called us all in for dinner. 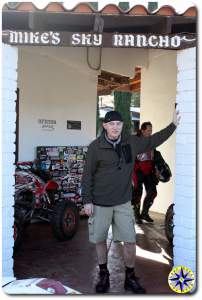 Dinner at the ranch is family style. Everyone sitting at long tables with colorful tablecloths beneath clear vinyl. Our little section of table had a large pitch of water and two salads waiting for us. There is a point at which everyone must question their bravery and decide if they will take a leap of faith or tuck their tail between their legs in retreat. For some this moment of truth is asking the head cheer leader to prom. For others it is jumping out of a perfectly good airplane. For us it was eating the salad and drink from the open pitch of  tap water. Calculating in my mind the number of Pepto Bismol tablets back in the room and the various places in the rig toilet paper was stashed I observed the other guests’ enjoying the fresh greens and cool water.  The other guests were Americans but had they been coming done here so often that they were accustomed to water?  Did they have some local drug that prevented them from getting sick?  Did they know something we didn’t about the facilities here?   In the end, I decided, in the scheme of things this was a minor risk worth taking.  Turns out the water at the ranch is drawn from the local spring creek and run through a reverse osmosis filter making it safe for even delicate digestive systems. 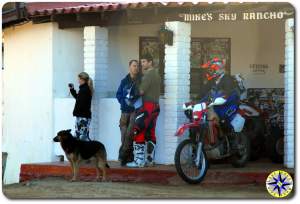 Straight off the barbecue, the steak that followed required no thought before biting into the juicy grass (sage) feed beef with its wild but delicate flavor. Beans, rice, fresh made tortillas and salsa followed. During the salad course Brad and I made nervous conversation as we tested our manhood with the washed greens. Now not a word was spoken as we inhaled the 20oz steaks covering our plates. This meal would set the standard by which the rest would be judged throughout the Baja.

On an adventure everyone deserves one decadent, self indulgence. For me that was a nice cigar enjoyed under the stars. Brad had decided his indulgence would be a shot of Makers Mark. Sitting poolside after dinner we started what would become our evening ritual throughout the adventure. Good friends, smooth bourbon and a fine cigar at Mike’s in the Baja. This is living. 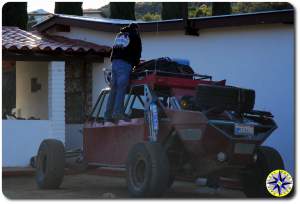 The ranch shuts down at 10 pm. and so does everything else as the generator is spun down abruptly.  Stumbling through the dark courtyard, up the awkward stairs and to our room we grabbed a headlamp and searched for matches to light the bedside candle.  By candle light we rummaged through bags in search of a tooth brush, Pepto and a clean pair of shorts.  A few minutes later we turned in for night.

The leftover steak from the night before became the morning’s huevos rancheros.  More beans, salsa and fresh made tortillas with coffee made it difficult to think of leaving this place.  For a brief moment both of us silently considered staying here and just telling everyone we drove to Cabo.  But the sun was warming away the morning chill, other guests we packing up their bikes and our GPS beacon would eventually betray our position. 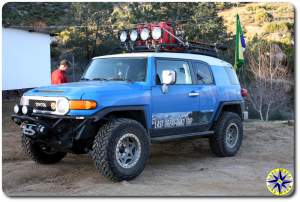 The morning rig inspection took on serious tone for me now.  If something broke out on the course there was no one to help with the field repair.  It was just going to be me and that burden was weighing heavy on my shoulders this morning.  I knew I’d prepared the rig the best I could for this adventure but the Baja is not forgiving of mistakes and we had 900 some more miles remaining in our adventure.

But listening to the rumble of the buggy’s big V8’s as I aired down the tires and sipped the last of the morning’s coffee brought a smile to my face.  Sure this was serious business;  we were taking on the Baja, mano a mano, which is exactly what we came down he for.