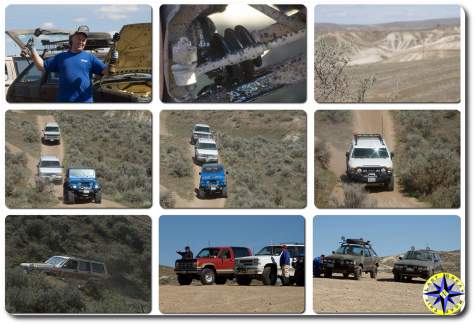 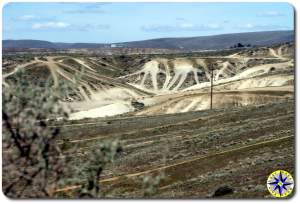 A while back Jerry over on the Pacific NW Backroad Adventures Forum announced an off-road adventure out to “The Slab” in central Washington.  The Slab, named for the little cement pad that serves as the gathering place, is an open sagebrush filled area just northwest of Zillah, Washington.  It is a wide open area full of two tracks, hill climbs and sunshine which sounded like heaven in the middle of a wet, western Washington spring.

If you’re going explore the dirt you’re going to have to cover a lot of concrete getting there. To get to The Slab the drive took us over the Snoqualmie Pass as the sun was coming up just past O’dark thirty. Crossing over the pass the 20 degree, tree lined, snow capped mountains were soon replaced by sunny dry rolling hills, scrub, fence lines and wide open highway, not a bad start.  Rolling through the Yakima Valley and on into Zillah I soon met up with the crew that I would be running with.  Strewn around Micky D’s were 4x4s sporting Ford, Toyota and Subaru badges telling the tale of those inside.  This group is focused on wheeling, not the wheels your driving and everyone is welcome to come along even a voodoo FJ Cruiser. 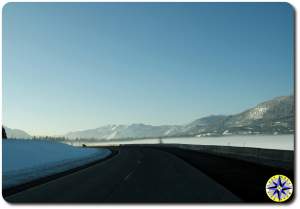 Our leader, and generally great guy, Jerry gave us a quick run down of what to expect on the slab; rolling hills, steep hills, and one call Rollover Hill along with a place aptly named flex canyon guaranteed to pit driving skills against rock, bent metal and broken glass.  Driving through the apple orchards, we soon arrived at the concrete pad to gather up and air down. 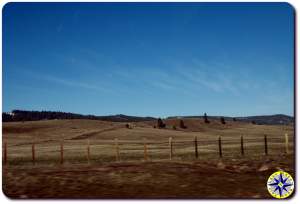 In no time the rigs were set as we mounted up for Jerry to lead us into the hills with a brief stop to peak at flex canyon.  This is a great place to work on driving skills.  Winding through “telephone line” you get plenty of off camber experience and a chance to measure the width of your rig by squeezing it past sage brush branches which appear to reach out for your rig in an attempt to apply pinstripes as you go by.

Approaching the down side of steep hills can be a bit unnerving as you loose sight of the ground below with only the hills on the other side of the valley appearing over the hood.  However these vistas are quickly replaced as gravity grabs the nose of your rig and pulls it down the incline giving you a clear view of where the incline rejoins level ground some 50 feet beyond.  Of course coming up offers a similar experience as you approach the  crest viewing nothing but blue sky and glaring sun until the rig levels out on top.  These are tiny moments where you just have to have faith. 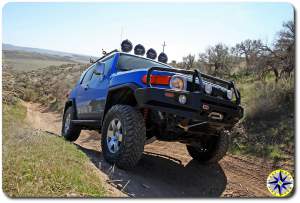 Soon a voice came over the CB announcing several guys from the All Wheelers Club had arrived and would soon join up with us.  These guy rolled in sporting rigs clearly built for the hard core stuff and we followed them back to Flex Canyon, where they put their skills to the test.  Big tires, high lifts and lots of flex, these guys made easy work of it.

Now back to that dark cloud thing…  As you recall from our 4×4 adventure in the dunes, day 1 turned into axle field repair, and on this run, one of the Subaru among us gave up not one but two IFS axle shafts.  This time however, he was equipped with all the spare parts, tools and a through knowledge of axle repair in order to have the Subaru back together just as everyone finished lunch. 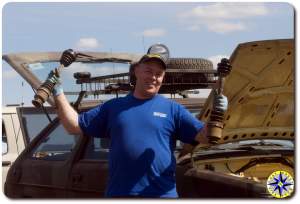 Not quite ready to leave yet, the whole crew poked around the hills a little more and before long we were looking up at Rollover Hill.  The 100 plus foot climb is steep and requires speed to conquer but just as you approach the upper area there is a bump forcing you to slow, followed by a stretch of traction-less gravel.  The hill gets its name from the rigs that fail to make through the final gravel section and have to back down, only to get kitty wompus with gravity taking hold and testing its roll cage. 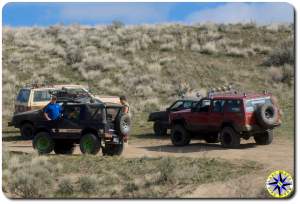 True as the day is long,  the fact is that “it is not the rig, its the driver”.  Phil first looked up the incline, walked to its top, surveyed  the change in terrain, calculated his changes and put together his plan.  Phill’s rig is a capable Ford Explore, but no giant lift, mud slinging tires or locking differentials, just a man who knows how to drive what he brung.  And we all watch as he headed up one of the more difficult routes making his way over the bump and clawing through the gravel leaving a cloud of dust as crested the top and made the sharp turn. After seeing who easy Phil made it look a number of us thought about taking a turn but never after 3:00 p.m. and you shouldn’t really climb hills for 30 minutes after eating…

The Slab is not a big area but with all the trails winding back around on themselves and cutting back and forth we spent a full day wheeling and enjoying the company making new friends as well as connect once more with some old one.  If you ever get the chance join a trip put on by Pacific NW Backroad Adventures…  I promise you wont be disappointed.