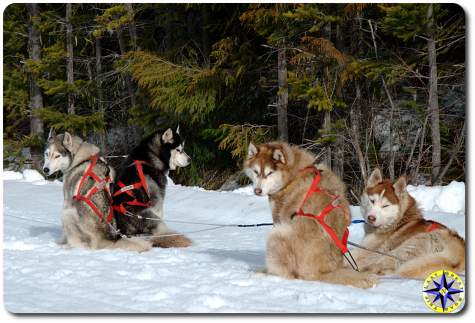 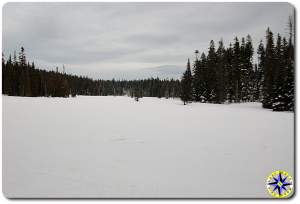 The sun began to dip below the tree line as we came over the last hill into Government Meadows at 4800-ft elevation, where the Pacific Crest Trail crosses the Naches trail. Way back when off-road was all there was, the Naches trail saw wagon trains searching for a pass through the Cascades.  After working our way up hill for the last 11 miles, the meadow was a welcome site and meant we had reached our goal for the night.

In mid February the Naches trail is closed to off-road vehicles so the boys (Tundra, Glacier, Chinook and Juneau) and I left the rig behind at the snow park.  We hooked up the sled, filled it with a few essentials and headed out to see how the landscape is transform in the winter months. The day was beautiful with the sun warming our faces as we worked our way through the woods. Occasionally the winter silence was broken by the snow machines as they went by us making the hill climbs seem so easy. Always as they passed by, they would slow, wave and make sure we were ok. Every once in a while one would stop and snap a photo… I guess they don’t see a lot of sled dog teams in these parts. 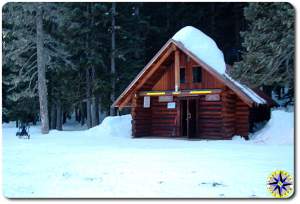 For the boys, Government Meadows meant their work was done. It also meant it was time for me to start working; getting them feed, watered and bedded down for the night. After taking care of them, I still needed to unload the sled and get the my gear inside the cabin.  And the light was fading fast.

In the 90’s, a couple of very courageous and ambitious souls built a cabin known as “Camp Mike Urich” that looks out over Government Meadows. Despite the lack of support from the forest service or other government agency these guys found funding, permits, and a couple of swinging hammers to erect a wood floor, tin roof log cabin with a loft and a few small windows. I wouldn’t call the cabin spartan, but the furnishings consist of two long bench on either side of the room and a big old wood stove in the back. But as the mercury began to fall, the cabin was dry and it felt as comfortable as any room at the Four Seasons as I stood there out of the wind and blowing snow.

Inside the cabin, I unpacked my tea kettle and searched for matches as my breath hung in the cold air. Mountain travelers know how fickle the weather can be and generously share what they can with others. A previous visitor had taken the time to cut and split a pile of wood for those who would come after. In no time I had a fire going and the cabin began to thaw. Although a fire feels good, lifts your weary spirits and lights the darkness, it won’t boil water anytime soon. For that, I brought the little camp stove capable of more blast furnace rolling boil than dainty sauce simmering. In no time the water in the little tea kettle was a boil. Drop in a little bouillon cube and before long I’m sipping chicken broth followed by a little green tea, all the while my glasses are fogged-over with steam. 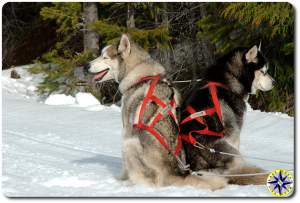 Cold winter nights are quiet, some times scary quiet, at least until the wind starts howling through the trees. But up in the solitude of the cabin loft, tucked inside my sleeping bag I enjoyed a few hands of Texas Holdem on my iPhone, warm, dry and extremely grateful for this oasis. By 8:00 p.m. I had run the virtual poker table, the fire was out and it was lights out.

I always worry about the boys and think they are warn out. The morning check -in found them barking and straining on the picket line ready to go. And even though I told them we would be leaving soon, their vocal desire to get started had me hustling to pack up and hit the trail. 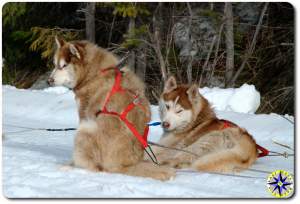 Elven miles up hill means eleven mile down hill. The ride down the mountain matched the thrill of any Six Flags roller coaster. What took nearly eight hours on the way in. The ride out was over in less than two with me holding onto the sled with both hand and slamming on the break with my feet. The boys can fly when gravity is working in their favor.

Winter in the North West is spectacular but short. Before long the Naches trail will be open to off-road vehicles. Maybe there is a summer trail run to the cabin in our future.  Got the maps (Naches Lower West, Naches West, Naches East) and we could always go up and stack a little wood for the next guy.

4 thoughts on “Boys Night Out”