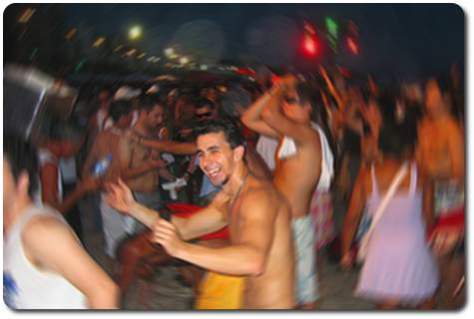 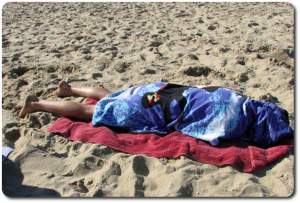 …What could go wrong at the beach?

We met a group of kids our age at the beach. In the course of introductions, we learned that two of them were our host’s cousins. We spent the entire day on the beach, swimming, drinking, laughing and dancing into the evening. It was then that we realized the value of sunblock and taking frequent breaks in the shade. As evening turned to night and the day grew darker and the temperature dropped, we realized that my friend and travel companion Karon had been badly sunburned. Chills were setting in and she was getting sick. We all started to wonder if she might need a hospital or if her illness was a combination of alcohol and sun poisoning. We kept her moving and drinking water and we kept her warm until late into the night when we all got tired and fell asleep in makeshift tents. When we woke the next morning, our eyes stuck shut from a wind storm that blew sand into every crevice, she was better. We spit sand and dug it from the corners of our eyes. The ocean water stung our skin as we dipped ourselves in the dusky morning to rinse the sand from our bodies. It had permeated the tents we’d made. It was on and in everything we owned (which was very little). That morning we packed up and went to visit our hosts Uncle and spend the day watching Karon to make sure she didn’t relapse into the shock we realized she was in the night before. The uncle chastised us for not being more careful.

When night came the decision was made to do something calmer. We went to a nearby village to eat, watch people in the square and relax. The village was small and quaint. Whitewashed shops surrounded a small park square with a gazebo at its center. The night air was cool. Children played while mothers talked and men smoked with one foot up on a park bench, shirts buttoned half way exposing tan chests. Our host and I led our little parade clockwise around the exterior of square. Behind us, my sunburned travel companion and our host’s older cousin Chris, behind them the prostituted and our host’s younger cousin Billy. After eating dinner from a street cart on the corner nearest our car, we walked up the short south street of the square to an ice cream cart and got cones. From there we walked the shorter west street licking our ice cream, people watching, and enjoying the peace of the night. At the north corner we turned again and walked, still taking in the view of the center park. It was alive with activity. It was peaceful and calm in its state of happy mania. Calm had fallen on all of us for a moment.

At once I felt our host grip my elbow and whisper. “Don’t look. Just look straight ahead and no matter what, don’t look back.” I fought the urge do the opposite but didn’t. There was urgency in his voice. Moreover, there was fear. I didn’t know what I wasn’t supposed to not look at but I wasn’t going to look. We were approaching a local police post. I glanced over my shoulder at Karon. She looked pale. Worried. Our host squeezed my elbow and I turned forward. We walked in silence and didn’t stop until our entourage came to a stop at the south east corner of the square near our car. It was then that I took inventory of our group. Two were missing. “What just happened?” I asked. Our host responded, “Billy and the prostitute were arrested.” 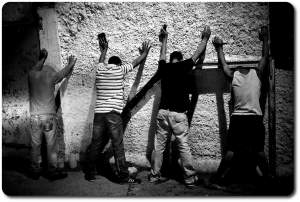 We stood next to our rented car in a village somewhere near Chichirivichi, somewhere near ‘the beach’, somewhere in Venezuela weighing what had just happened to our host’s other cousin. Chris decided he was going in. He was going to march back to that police post and demand an explanation and the release of his cousin and the prostitute. Our host, Karon, and I watched as he marched directly across the square, through the children and mothers and fathers and grandparents, to the steps of the station where a half dozen policemen lazed observing the scene in the park. Several of them stood as Chris approached them. We could see him speaking to them. Then we saw the men arrest him too. As he disappeared into the station, our host’s chest puffed. That was it. He wasn’t taking any more of this from these degenerate dopes with badges and guns. He was going to go over there and demand the release of our three friends. Karon burst into tears and grabbed his arm with both hands and dug her heels into the pavement. “NO!” she demanded. “If you get arrested we can’t help any of you. We don’t speak the language! We don’t know where we are! We don’t have any money! We can’t even find our way back to your uncles, let alone Caracas! You can’t leave us here!” A vision of the article on the airplane flashed in our minds. 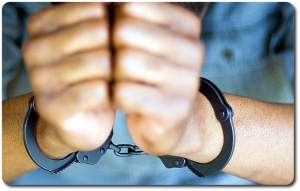 Our host calmed down and it was decided we’d go get the uncle. When we returned to our spot on the south east corner of the square with the uncle in tow, he instructed us to stay in the car and keep it running. When he was done, we were leaving immediately. Just as his son had done, he crossed the center of the square and walked directly to the steps of the station. Just as before, several officers stood, forming a barrier between the station and the uncle. We saw him speak. We saw two or three officers turn away from him and scale the steps of the station disappearing into the station. In moments we saw all three captives escorted out the front door, down the steps and into the custody of the uncle. The four turned and walked calmly, too calmly for my liking, back across the park. In silence all seven of us took seats in the car and no sooner than the doors of the vehicle shut and the car was put in drive did the prostitute begin sobbing uncontrollably and the men begin talking at once with rapid urgency; each illuminating the story of what had occurred from their vantage. I learned that the police, who were nothing more than local derelicts with badges, didn’t like what our friends were wearing. The prostitute was wearing a bikini top and cut off shorts. The cousin was wearing a t-shirt, bathing suit bottoms with a towel wrapped around his waist. That was the reason for their arrest. They’d arrested the second cousin, perhaps hoping to obtain a small ransom for the boys. They released them all when the uncle kindly explained that he and his compatriots owned the land these men’s homes were built upon and said their homes would be burned to the ground before morning if the three prisoners were not released. We were definitely not in Kansas anymore. We dropped the group off, including the prostituted and left that night back to Caracas. The next morning, we told our hosts family of the adventures we’d experienced over the past three days. They were not surprised.

One effect this trip had on my travel companion was that it instilled in her an overwhelming appreciation for and desire to call home. Our host’s father assured us he could make that happen but not until evening. We spent the day visiting family members and driving round the city, since we’d rented the car for the week, seeing the sights; Universidad Central, the shopping district, and a crazy night club district where transvestites walk the streets cat calling passersby and passing cars. We laughed, relaxed and returned to the apartment with the prison cell door at dinner time. Karon still antsy about calling home asked again. Our host’s father assured us that we would but first we were going to dinner.… (continued To Venezuela… and Beyond – Part 3 everything’s different here)